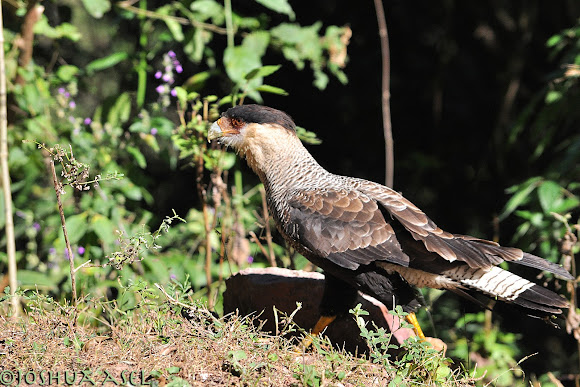 A bold, opportunistic raptor, the Southern Crested Caracara is often seen walking around on the ground looking for food. It mainly feeds on carcasses of dead animals, but will steal food from other raptors, raid bird nests, and take live prey if the possibility arises (mostly insects or other small prey, but at least up to the size of a Snowy Egret). It is dominant over the Black and Turkey Vulture at carcasses. It is typically solitary, but several individuals may gather at a large food source (e.g. dumps). Breeding takes place in the austral spring/summer in the southern part of its range, but timing is less strict in warmer regions. The nest is a large open structure, typically placed on the top of a tree or palm, but sometimes on the ground. Average clutch size is two eggs.

About 1 hour NW of Jujuy, Argentina, I was super excited to spot this guy on the side of the road. Ever since I saw one in a picture I've wanted to see one in real life. My team leader told me we were lucky to get this close because they usually scare easy around cars. Loved it :)

Thank you Stian and Noel!