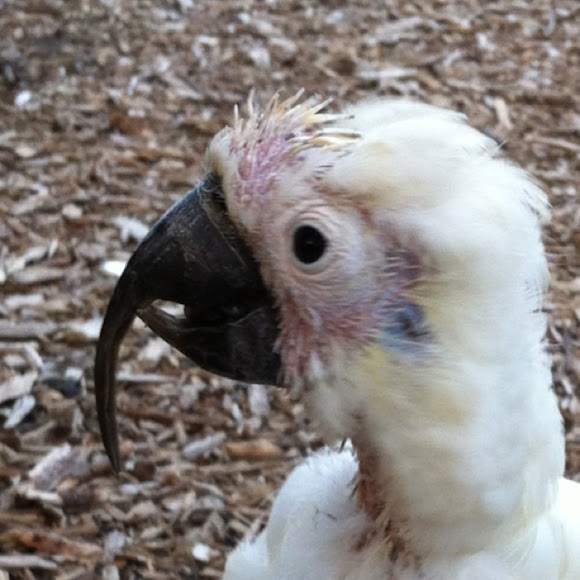 Size Range: 45 cm to 50 cm Identification: The Sulphur-crested Cockatoo is a large white parrot. It has a dark grey-black bill, a distinctive sulphur-yellow crest and a yellow wash on the underside of the wings. Sexes are similar, although the female can be separated at close range by its red-brown eye (darker brown in the male). This is a noisy and conspicuous cockatoo, both at rest and in flight. Young Sulphur-crested Cockatoos resemble the adults.

Habitat: Sulphur-crested Cockatoos are found in a variety of timbered habitats and are common around human settlements. The birds stay in the same area all year round. Distribution: The Sulphur-crested Cockatoo's range extends throughout the northern and eastern mainland, and Tasmania. A small population has become established around Perth, Western Australia. The species also occurs in New Guinea and the Aru Islands, and has been introduced into New Zealand and Indonesia.

This diseased Sulphur-Crested Cockatoo was part of a big flock in the Lorn (in Victoria, Australia) caravan park. I also included a picture of a healthy Sulphur-Crested Cockatoo for comparison. I believe this bird to be suffering from a disease known as Beak and Feather Disease, as the name implies it affects the beak and feathers. The disease can in some individuals affect the feathers or beak only, or as in this case both. This disease has being in my experience always fatal, bird will starve to death as their beaks are to soft to manipulate their food or are to overgrown, and if the feathers are affected then bird will lose to much body heat and die from hypothermia. I have included some websites with information on the disease if you are interested. http://www.birdclinic.net/avian6.htm http://www.environment.gov.au/biodiversi... On a more personal note, you need to be very careful of these birds if you ever go there as they will land on you to try and get your food. (I never fed them!) It was a big concern for me at the time I visited as I was unable to let my children out of the cabin because the whole flock were attacking them if they went outside, at the time my boys were 2 1/2 and the youngest was 11 months. My information on species specifics come from: http://australianmuseum.net.au/Sulphur-c...

So true Mark, it is a sad very sad thing, what I hate most about it is it is so slow to progress, how long the host has to suffer is horrible!

Sad. We have two visiting at the moment which I don't think will make it through this winter. What an amazing virus. It destroys body feathers (and beak) but not flight feathers so the bird can still travel to spread disease. This bird doesn't look too bad at all compared to some.

Thank you Naross and Daniele. A bird with the disease in captivity can survive for many years as long as the beak is not affected, but every time the bird sheds the disease will be in the dead scales from the beak and in the old feathers. So great care is needed, and unfortunately as birds in the wild do not have the external supports a captive bird gets is it almost always fatal.

Thanks for the info Sarah.

This is tragic, Sara. I've heard of this disease but have never actually seen a case. Very sad indeed. Any chance this fellow could recover, or is it fatal? I've added this photo as a favourite simply because it moves me. Thanks for sharing. Neil