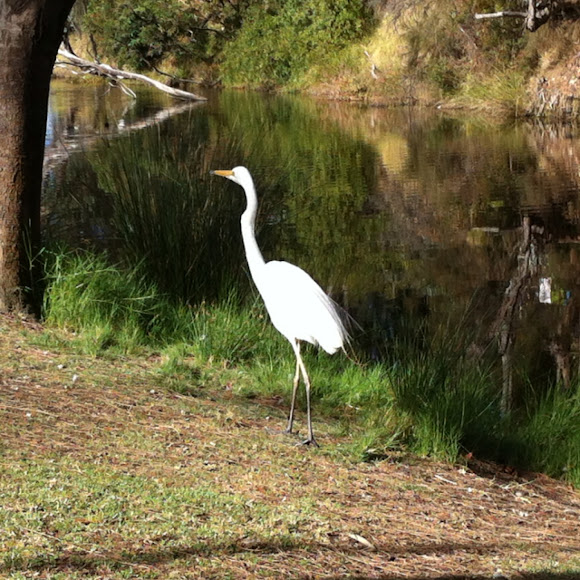 Identification: The Great Egret's overall plumage is white, and, for most of the year, when not breeding, the bill and facial skin are yellow. The feet are dark olive-grey or sooty black, as are the legs. During the breeding season, the bill turns mostly black and the facial skin becomes green. Also at this time, long hair-like feathers (nuptial plumes) hang across the lower back, and the legs become pinkish-yellow at the top. Young Great Egrets are similar to the adults, but have a blackish tip to the bill. Size Range: 70 cm to 90 cm

Habitat: Great Egrets prefer shallow water, particularly when flowing, but may be seen on any watered area, including damp grasslands. Great Egrets can be seen alone or in small flocks, often with other egret species, and roost at night in groups. Distribution: Great Egrets occur throughout most of the world. They are common throughout Australia, with the exception of the most arid areas.

Feeding and Diet: The Great Egret usually feeds alone. It feeds on molluscs, amphibians, aquatic insects, small reptiles, crustaceans and occasionally other small animals, but fish make up the bulk of its diet. The Great Egret usually hunts in water, wading through the shallows, or standing motionless before stabbing at prey. Birds have also been seen taking prey while in flight. Mating and Reproduction: The Great Egret breeds in colonies, and often in association with cormorants, ibises and other egrets. Both sexes construct the nest, which is a large platform of sticks, placed in a tree over the water. The previous years' nest may often be re-used. Both sexes also incubate the eggs and care for the young (usually two or three). Breeding season: October to December in the south; March to May in the north. Clutch size: 2 to 6 Incubation: 28 days Time in nest: 40 days Sighted on the banks of a creek that ran next to the Lorne Caravan Park in Victoria Australia, I was able to see it through my cabin kitchen window. My information came from this website: http://australianmuseum.net.au/Great-Egr...

Thank you Debi, they are very graceful and interesting to observe when they are looking for food!

I love Egrets. i just discovered them this past summer in Florida. i have just uploaded my profile and have not yet included any other photo's but will be soon. Nice pictures