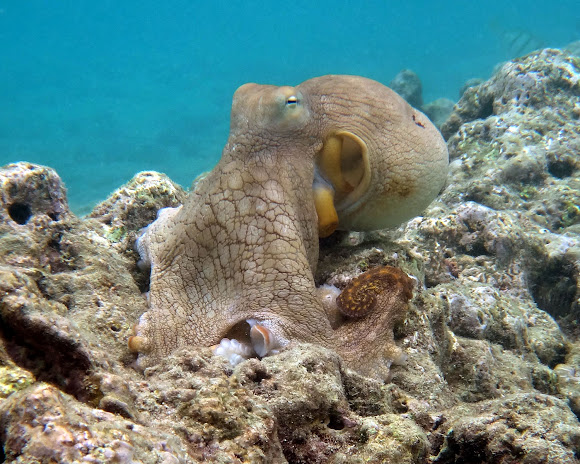 Pacific Day Octopus, AKA Big Blue Octopus or Cyane's Octopus, is an octopus in the family Octopodidae. It occurs in both the Pacific and Indian Oceans, from Hawaii to the eastern coast of Africa, and grows to 16 cm in mantle length with arms to at least 80 cm.

Pacific Day Octopus emerging from his hiding spot on the reef at Hanauma Bay, Oahu, Hawaii.

To see these guys, I usually have to get in the water a dawn, before the large crowds scare them all into hiding. First picture he is camouflaged, second he is normal, and in the third he is inking as he swims away (too close I guess with the camera?).

I will attempt to do so. I am currently in the United Arab Emirates, so it may take me while to find the time/places for wildlife out here!

You're welcome SargonR. Keep them coming!

Very cool that you chose to use my photo for World Octopus Day! Hopefully you all enjoy viewing this series as much as I enjoyed photographing it in beautiful Hanauma Bay, Oahu, Hawaii.

Day Octopus for Octopus Day...what can I say!!! CONGRATULATIONS. Lovely shot. And something I doubt I will ever see in real life. Thank you for sharing.

Congratulations SargonR! Your spotting has been chosen to illustrate World Octopus Day! "World Octopus Day was created to celebrate one of the greatest survivors of the planet. Indeed, octopus fossils have been found dating back more than 300 million years, pre-dating dinosaurs. Octopuses show some remarkable features such as eight semi-autonomous arms, three hearts and advanced intelligence. Octopuses can solve problems, and can be trained to distinguish between different shapes and patterns. There are now legitimate concerns that octopus populations are locally vulnerable to overfishing.".
Facebook: https://www.facebook.com/projectnoah/pho...

beautiful, thanks for sharing.

Amazing series of this creature in its many disguises.