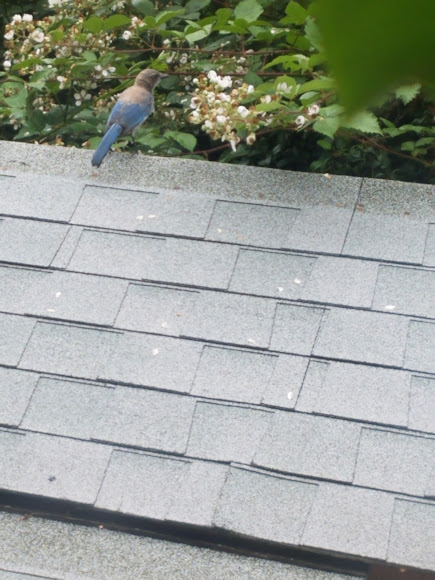 "The California scrub jay (Aphelocoma californica) is a species of scrub jay native to western North America. It ranges from southern British Columbia throughout California and western Nevada near Reno to west of the Sierra Nevada. The California scrub jay was once lumped with Woodhouse's scrub jay and collectively called the western scrub jay. The group was also lumped with the Island scrub jay and the Florida scrub jay; the taxon was then called simply scrub jay. The California scrub jay is nonmigratory and can be found in urban areas, where it can become tame and will come to bird feeders. While many refer to scrub jays as "blue jays", the blue jay is a different species of bird entirely. California scrub jays usually forage in pairs, family groups, or small non-kin groups, outside of the breeding season. They feed on small animals, such as frogs and lizards, eggs and young of other birds, insects, and (particularly in winter) grains, nuts, and berries. They will also eat fruit and vegetables growing in backyards. They can be hand-fed by humans. California scrub jays, like many other corvids, exploit ephemeral surpluses by storing food in scattered caches within their territories. They rely on highly accurate and complex memories to recover the hidden caches, often after long periods of time. In the process of collecting and storing this food, they have shown an ability to plan ahead in choosing cache sites to provide adequate food volume and variety for the future. Western scrub jays are also able to rely on their accurate observational spatial memories to steal food from caches made by conspecifics. Food storing birds implement a number of strategies to protect their caches from potential 'pilferers.'Western scrub jays are also known for hoarding and burying brightly colored objects. Western scrub jays have a mischievous streak, and they are not above outright theft. They have been observed stealing acorns from acorn woodpecker caches. Some scrub jays snatch acorns from the hiding places of other jays. When these birds go to hide their own acorns, they check first that no other jays are watching. Recent research has suggested that western scrub jays, along with several other corvids, are among the most intelligent of animals. The brain-to-body mass ratio of adult scrub jays rivals that of chimpanzees and cetaceans, and is dwarfed only by that of humans. Scrub jays are also the only non-primate or non-dolphin shown to plan ahead for the future (known as metacognition), which was previously thought of as a uniquely human trait. Other studies have shown that they can remember locations of over 200 food caches, as well as the food item in each cache and its rate of decay. To protect their caches from pilfering conspecifics, scrub jays will choose locations out of sight of their competitors, or re-cache caches once they are alone, suggesting that they can take into account the perspective of others. California scrub jays also summon others to screech over the body of a dead jay, according to new research from the University of California, Davis. The birds' cacophonous "funerals" can last for up to half an hour." Wikipedia