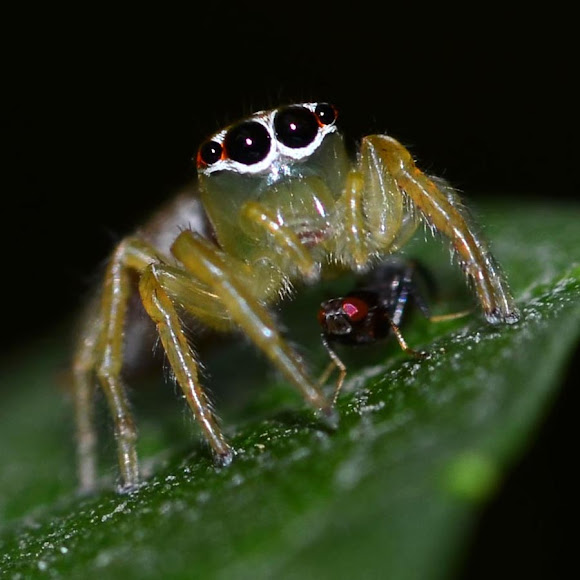 Symbiotic relationship between a jumping spider and a fly. The fly is probably a milichiid species.

Symbiotic relationship implies that both parties get something out of the relationship. In the above two examples, the intruder gets an easy free meal, using the hosts web to catch its prey. The host nephila gets his web cleaned of all the small flies that can clog up the web.

The third, and by far the most interesting symbiotic example was between this jumping spider and a fly.

At first sight, I thought the spider was eating the fly, but on closer inspection, the spider was simply standing over the fly. When the spider moved, the fly moved with it. When the spider jumped to another leaf, the fly followed. As the fly re-approached the spider, the arachnid raised up like it was going to attack, it then relaxed and allowed the fly to run underneath once more.

Obviously symbiotic, but at the time, I could not figure out what the spider got out of the relationship. A few weeks after the shoot, I zoomed in and noticed that the fly appeared to be feeding off the spider. Further research revealed that nephila has been known to allow a fly to clean its fangs after feeding, then, it all fell into place. The fly was cleaning the fangs and around the mouth of the spider after a meal, as can be seen from the second and third images.

As far as I know, this particular relationship has not been documented and extensive searches did not bring up any images of such scenes as this, so I do believe these images are unique.

This set is for Karen, Yasser and Jakubko for making me really feel part of this community.

Thanks very much Ash :)

It was about biodiversity of Indonesia Dave and that certainly includes your spotting. But OK, I'll ask that it be removed.

However, I do not see the relevance of my post about symbiosis. Neither the spider nor the fly in my post have positive identifications. I am flattered that you would choose to link my article, but would prefer if you removed it please.

Hi folicallychalled. Your spotting is featured in the new PN blog post via a link! Cheers
http://projectnoah.tumblr.com/post/58511...

Obviously it is a rare sight. The best advice is to find a jumper that is eating and wait. Best take a stool, it could take an hour or two :)

Congratulations ! amazing information and hence the spot :)
Very special SOTD :)
I am getting curious to see one of those relationships in naked eye :)

So kind Leanne, thanks.

Also thanks to everyone else who has left such wonderful comments :)

Belated congratulations Dave, on your SOTD & for all you contribute to P.N. :)

Great capture folicallychalled,congrats on the SOTD and thanks for sharing

Amazing. That's a great observation, and great job documenting & researching it too.

The things we discover by observing, taking pictures and then sharing them here for others to see, it is Fantastic, thank you, PN members and folicallychalled.

Wow, that's amazing! Thanks for all the information.