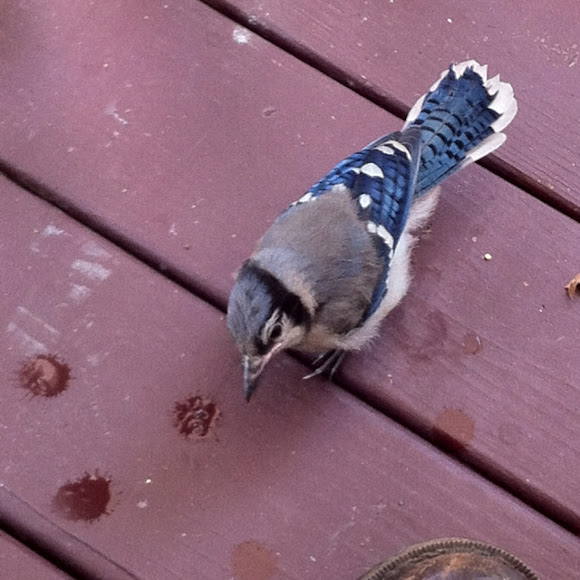 Areas with lots of Oak Trees, in forests, parks & yards. Range: East of the Rockies from southern Canada to the Gulf of Mexico. This Blue Jay was found in Cushing Mem. Park in Canton,GA 30114.

My Grandkids saw 2 Blue Jays loudly chasing a Crow w/2 Chics in the Crow's beak. It dropped 1 chic, but Jay's continued flying after the Crow. After discussing letting nature be nature & no birds came to bird for several hours, baby bird was placed in plastic box (without touching the bird) for the night. Next morning no birds came back for baby bird. I called the local animal & bird rescue sites but was told they would not help, as Blue Jays are in the Crow Family... I looked on www but only found how to raise baby birds/Jays. Grandkids insisted we try to save & raise this bird & named him Lucky, as they found him. We did raise him by feeding bird tiny wax worms every 2 hours during the day, then progressed to small, then med., then large meal worms which we grew. We moved him into a cage temp. till he looked able to fledge, then opened cage & he flew to nearby tree. Several hours later he was back flapping wings till we fed him again. We fed him less & less & helped him to learn to eat blue berries, black berries & Tent Caterpillars, even small fish found on the lake shore. Soon other people in park came to see bird & said he would fly to people for food, but they also reported him eating bird seeds & working on acorns. Baby bird was found in early June 2012 & last seen in late August 2012. Status Update: Lucky has not been seen yet this year- 6/16/13. Other kids continue to ask if he had returned, & tell me about the journals & science projects they have done on Blue Jays after meeting Lucky last year. PS: I don't suggest trying to raise a bird as we did unless you have lots of time, AND cannot locate a rescue service. I will post any updates IF Lucky returns.