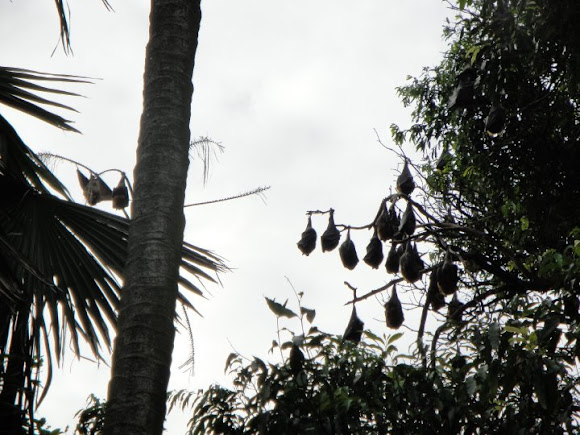 Pteropus poliocephalus is the largest bat in Australia. As with all members of Pteropodidae, Pteropus poliocephalus does not have a tail, and claws are present on the first and second digits. They do not echolocate, and therefore, the distinctive enlarged tragus or leaf-ornamentation found in most species of Microchiroptera is not present. Since they do not echolocate, they must rely on their large eyes for navigation and finding food. As the species' common name implies, Grey-headed flying-foxes have faces which are fox-like. The body is dark grey, with the fur on the head being of a lighter color grey. There is also a reddish-brown collar of fur that encircles the neck. Fur on the legs extends all the way to the ankle, which is one distinguishing characteristic from other members of the genus Pteropus. The patagium is black, and it is possible for the wingspan of some individuals to be up to one meter. The head and body length is between 230 and 289 mm, with an average of 253 mm. The forearm length is between 138 and 180 mm, with an average of 161 mm. Weight generally varies between 600 and 1000 g, with an average of 677 g. However, some individuals have been recorded as weighing more than 1 kg. These figures are somewhat different according to different sources, but they are generally within a few units of each other.

Pteropus poliocephalus is found in a variety of habitats including rainforests, woodlands, and swamps located in Eastern Australia. They are typically found at elevations less than 200 m, but have been found at elevations as great as 700 m. These bats prefer to roost in the branches of large trees. They are usually not found more than 150 km inland and are even present on some secluded islands. Because of encroachment of human activity into their habitats, they are sometimes found in suburban areas, using the agricultural lands of their human neighbors as a food source. Pteropus poliocephalus is a semi-migratory species. The migrations of these animals have been attributed to different reasons. They often go where the food supply is abundant, although it has been hypothesized that they also undertake these long-distance flights to enhance their mating opportunities, or to gather more information about other parts of their range.