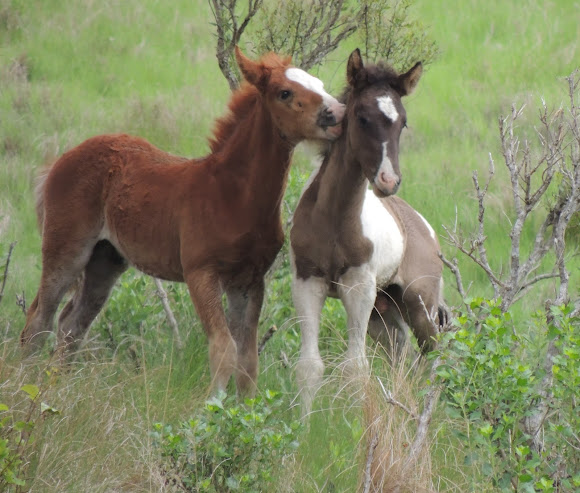 Here are two new Foals that were recently born at the Chincoteague Island National Wildlife Refuge in Chincoteague, Virginia. I was so very lucky to have seen them as there is only one observation platform to view these wild horses at this refuge and there were several horses around the area that day. A newborn foal's legs are already 90% of the length they will be when full grown. Able to stand just one hour after birth. Can walk, trot, and run just two hours after birth. Most foals will start to nurse less than two hours after being born. A female foal is called a filly. A male foal is called a colt. More foals are born between April 15- May 15 than any other time.

Thank you again LisaPowers for making those cute foals the PN daily fun fact. Loved it. I liked the page on facebook.com/projectnoah and also shared it.

We post it to our main communication page:
https://www.facebook.com/projectnoah

Be sure to like the page to get our daily Fun Facts, Spot of the Day (SOTD), Conservation News and Member Spotlights!

Thank you LisaPowers. What is a PN fun fact?

Congrats! This spotting is being featured as a PN Fun Fact:

Believed to be the descendants of horses that survived a shipwrecked Spanish galleon, the ponies of Chincoteague have adapted to life on an island. They feed on dune and marsh grasses and drink from freshwater ponds and puddles that fill from the rain. Because the grasses they eat have so much salt, the ponies must drink twice as much water as other horses. To get enough nutrition, the ponies spend most of the day eating. Adults attain a height of only 12 to 13 hands high, falling under the 14 hands that designates them as ponies instead of horses. These wild ponies have survived free on the island of Assateague, off the coast of Virginia and Maryland, for over 400 hundreds of years.

Thank you Neil. That was a very lucky spotting because the wild horses of Chincoteague Island Natl Wildlife Refuge do not always come within the viewing area. I actually spotted four new foals. So happy!

Beautiful photos and spotting, Mary. These little ones are gorgeous.