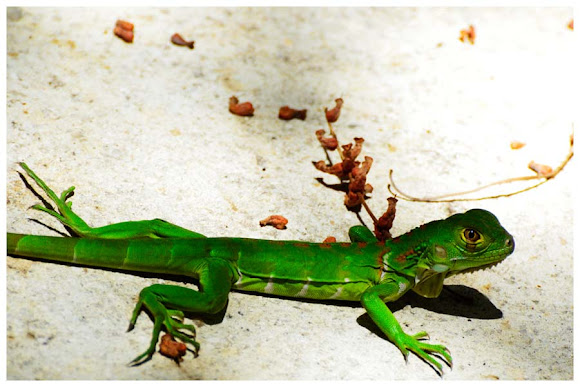 The green iguana or common iguana (Iguana iguana) is a large, arboreal, mostly herbivorous species of lizard of the genus Iguana native to Central, South America, and the Caribbean. Usually, this animal is simply called the iguana. The green iguana ranges over a large geographic area, from southern Brazil and Paraguay as far north as Mexico and the Caribbean Islands. They are very common throughout Puerto Rico, where they are collaquially known as "Gallina de palo" and considered as an invasive species introduced from South America; in the United States feral populations exist in South Florida (including the Florida Keys), Hawaii, and the Rio Grande Valley of Texas.

Sunbathing in the backyard