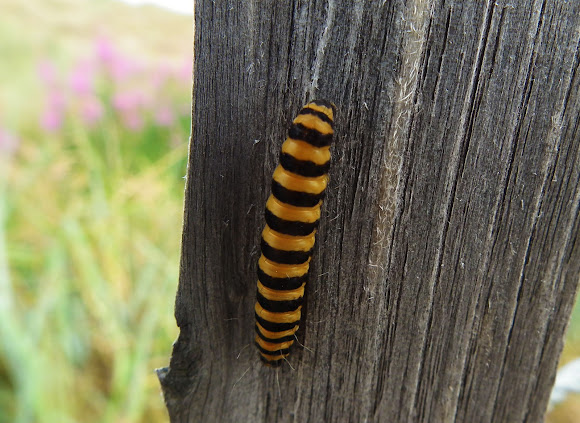 The caterpillars of the cinnabar moth feed from July till early September, and will then spend the winter as a pupa underground. Adults emerge in May and fly till the end of July. These caterpillars feed on the poisonous ragwort, accumulating the toxins in their body as a way to fend off predators. Many caterpillars can be seen on a single plant. Ragwort is often destroyed in large numbers in the UK due to fears of toxicity to livestock. Sadly this has had adverse effects on the cinnabar moth population (as well as the many other species of insect that need it).

Very widespread, in the north of the UK is has a coastal distribution. I found this caterpillar on the sand dunes of the West Sands in St Andrews, Scotland.

The Butterfly Conservation has released figures that show that Cinnabar Moth populations have fallen dramatically since 2003, when an act was introduced that allowed land owners to remove ragwort as they saw fit. Almost 80 species of insect live/feed on ragwort in the UK, and 30 of those exclusively so.

would you please consider adding your uk arthropod spottings to
The U.K Arthropod Survey,Thanks!
http://www.projectnoah.org/missions/4649...