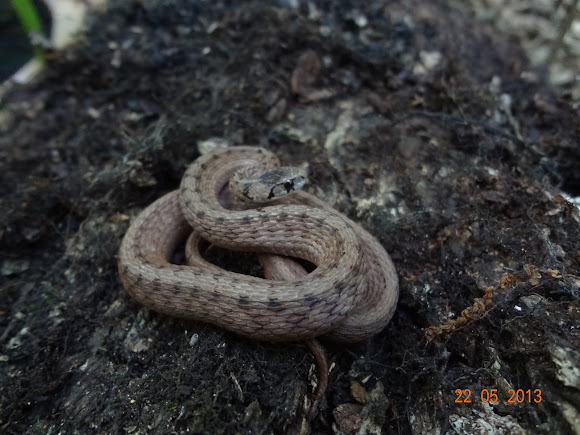 Brown snakes (of the US) are little, non-venomous, and non-aggressive. They usually have two rows of dark spots down the back, which are sometimes linked, and coloration can be brown/reddish/gray/tan with lighter bellies. They typically have dark flecks below the eyes, which can be used to ID individuals that may be lacking dorsal patterns (as opposed to earth snakes which are also small brownish snakes).

S. dekayi can commonly be found wherever there is ground cover to hide them, which can be backyards or forest. They like to hide beneath fallen branches or logs, underneath the bark of said branches and logs, and also under piles of leaf litter. This one was found under the bark of a large fallen branch (the branch in the photo). Once photos were taken, we put the snake back.

Because these guys generally don't stay put for very long, the photo may be misleading. I used my cupped hand to get the snake to curl up and stay put long enough to get a clear photo, so it may look a little like the snake is being defensive. But these guys are not aggressive at all. Be gentle when handling these guys so as not to stress them out.

Love these little guys! We've had quite a surge in numbers of DeKay's Brown Snakes in my area of Illinois. I hardly go out hiking anymore without seeing one. Nice shot!