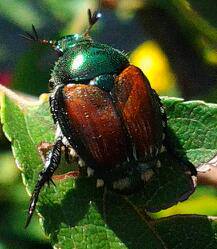 The beetle species Popillia japonica is commonly known as the Japanese beetle. It is about 15 millimetres (0.6 in) long and 10 millimetres (0.4 in) wide, with iridescent copper-colored elytra and green thorax and head. It is not very destructive in Japan, where it is controlled by natural predators, but in America it is a serious pest of about 200 species of plants, including rose bushes, grapes, hops, canna, crape myrtles, birch trees, linden trees and others. It is a clumsy flier, dropping several centimeters when it hits a wall. Japanese beetle traps therefore consist of a pair of crossed walls with a bag or plastic container underneath, and are baited with floral scent, pheromone, or both. However, studies conducted at the University of Kentucky and Eastern Illinois University suggest beetles attracted to traps frequently do not end up in the traps, but alight on plants in the vicinity, thus causing more damage along the flight path of the beetles and near the trap than may have occurred if the trap were not present.[1] [2] These insects damage plants by skeletonizing the foliage, that is, consuming only the leaf material between the veins, and may also feed on fruit on the plants if present