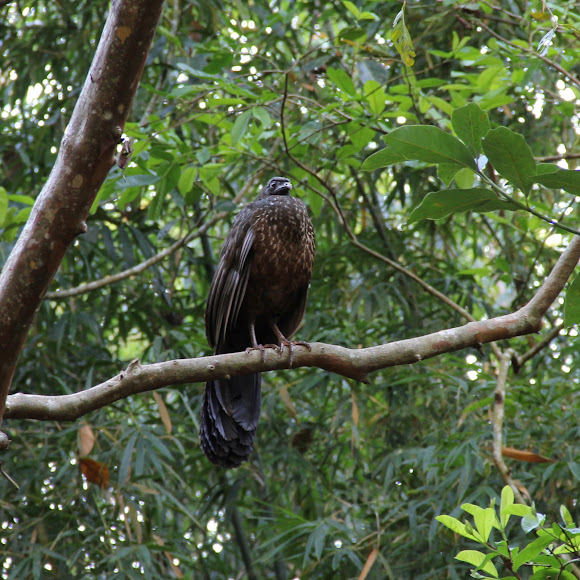 Cracidae Family. Commom names in Brasil are Jacu, Jacuaçu, Jacupeba Those were spotted in groups of four or five, usually running/flying away when I was too close. They were found right in the intersection between bamboo and tropical native forest and the backyards of a house in the countryside of Rio de Janeiro. They've moved there around 2006. Since then, they have this kind of ritual. At about 5 a.m. they start to scream a lot and fly aorund the tallest trees. As soon as the sun rises, they start looking for food in the grassy area on the backyards. They seem to love the Jabuticabas (Plinia Trunciflora); During the day their actvity slows down, and in the afternoon most of then are perched on lower branches with thir necks shrunk; This time is when I was able to get closer, they didn't seem to be bothered with my presence. I never have spot then during nightime, only reapiring aorund 5 a.m

As mentioned, they were found in the border of a bamboo and tropical native forest area with a grassy backyard of a house in the countryside of Rio de Janeiro. This house's been there isolated and near native forest areas for about 25 years, but the Jacu just moved close to the house around 2006. Before thah, they were rarely seem in the region.

Their noise in the beggining of the day, when they start to fly around the taller trees, sound quite like primates.

Thanks! The most impressive is the noise they make, it really sounds like some kind of monkeys and as they move over high trees, with their heavy body (for a bird) you could really think it's a group of primates