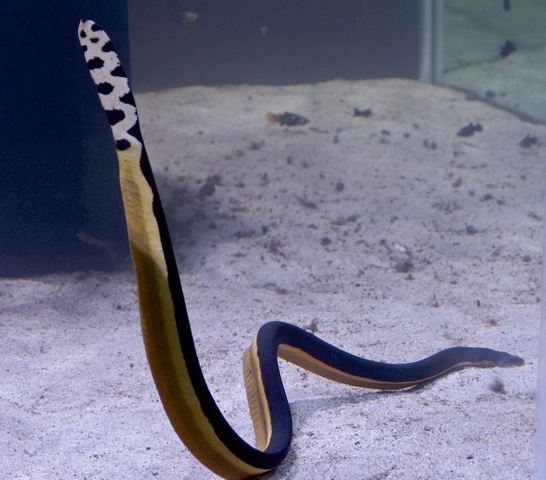 Pelamis platura, commonly known as the yellow-bellied sea snake, yellowbelly sea snake, or pelagic sea snake, is a species of sea snake found in tropical oceanic waters around the world. It is the only member of the genus Pelamis. Sea snakes are closely related to the venomous Australian snakes of the family Elapidae, but are sometimes classified in a separate family, Hydrophiidae. The venom of this species is highly potent, like other sea snakes. In Australia, sea snakes are rarely aggressive and bites are uncommon. The yellowbelly is the most widely distributed sea snake and is capable of living and giving birth entirely in the open sea (it is totally pelagic), being found in all coastal waters around the rim of the Pacific Ocean except Alaska south to southern California, and in the coastal waters of the Indian Ocean from the Persian Gulf eastwards.

Seen in a tank of water in the Reptile exhibition at the InBio Park in Santo Domingo, Heredia, Costa Rica.