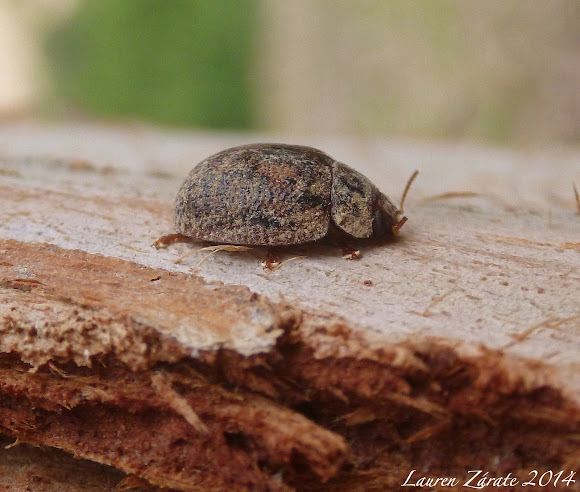 While camping on Santa Cruz Island of the Channel Islands off the Santa Barbara coast of California, we began noticing that many of the Eucalyptus leaves in the campground area of Scorpion Cove were heavily damaged by something feeding on them (Picture 3). After searching for a while we found a brown mottled leaf beetle about 5 mm long, often coated in sticky gum residue, on leaves, tree trunks, picnic tables and on the ground. We also found larvae and prepupal larvae on the trunks of the Eucalyptus trees (Picture 5). In addition, we found a very similar colored Orb Weaver Spider feeding on the beetles from webs within the cracks and crevices of the tree trunks (Picture 6). These beetles were more active at night, which is when we first found them.

Eucalyptus grove around the lower campground area of Scorpion Cove on Santa Cruz Island, Channel Islands. These trees were introduced to the Island over 100 years ago and have been allowed to remain because of their historic value (along with a few Monterrey Cyprus).

This species of beetle is native to Australia and was recently introduced to California. It has spread rapidly over many Eucalyptus areas in Southern California and has even reached the offshore Channel Islands. http://www.ipm.ucdavis.edu/PMG/PESTNOTES... http://acwm.co.la.ca.us/pdf/AustralianTo... http://bugguide.net/node/view/13061/bgim... Both Blue Gum (Eucalyptus globulus) and Red Gum  (Eucalyptus camaldulensis) occur on Santa Cruz Island. I'm not sure if this beetle was only on one of these species or on both. http://www.nps.gov/chis/naturescience/te....

Such an amazing spotting, Lauren. Excellent documentation of this species.