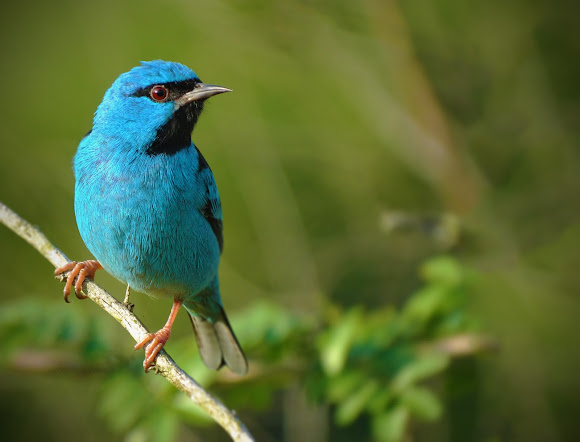 The blue dacnis or turquoise honeycreeper (Dacnis cayana) is a small passerine bird. The blue dacnis is 12.7 cm long and weighs 13 g. Despite its alternative name, it is not a honeycreeper, which are longer-billed. The adult male is turquoise blue with a black around the eyes, and on the throat and back. The wings and tail are black, edged with turquoise. The female and immature are mainly green with a blue head, paler green underparts and green-edged brown wings.

This member of the tanager family is found from Nicaragua to Panama, on Trinidad, and in South America south to Bolivia and northern Argentina. It is widespread and often common, especially in parts of its South American range. It occurs in forests and other woodlands, including gardens and parks.

The bulky cup nest is built in a tree and the normal clutch is of two to three grey-blotched whitish eggs. The female incubates the eggs, but is fed by the male. These are social birds which eat mainly insects gleaned from foliage, flowers or bromeliads. Fruit is often taken and usually swallowed whole, but nectar is rarely consumed. The blue dacnis’s call is a thin tsip. The purplish honeycreeper (Chlorophanes purpurascens), a bird from Venezuela known only from the type specimen, is considered to be an intergeneric hybrid between the green honeycreeper and either the red-legged honeycreeper or the blue dacnis.

What beautiful birds ! Thanks for sharing your wonderful series and Congratulations on the SOTD, Aisse !!

What a beautiful series Aisse ... Congratulations on the SOTD .. very well deserved

Congrats on SOTD and a wonderful series

Congrats on this nice series!

Congrat Aisse, your stunning blue dacnis is our spotting of the day! Only the males sport brilliant turquoise plumage, check out the link below for more photos and a peek at the female!

beautiful series! i like the third one a lot. very sharp.