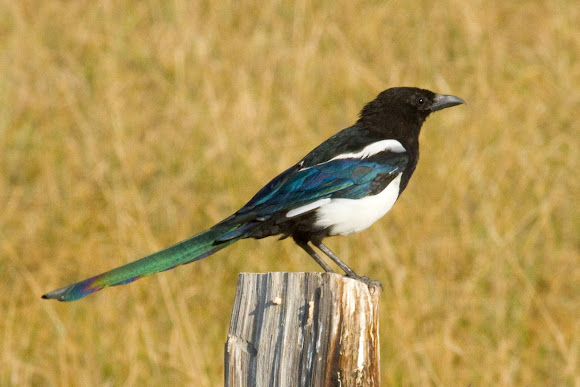 The Black-billed Magpie (Pica hudsonia) is a bird in the crow family that inhabits the western half of North America. The adult Black-billed Magpie is 45–60 cm (18–24 in) long and weighs 145–210 g (5.1–7.4 oz). Males are generally 6–9% larger and 16–20% heavier than females. The tail is long and makes up half of the bird's length. Wingspan is about 60 cm (24 in). The bird is black with white shoulders, a white belly, and iridescent dark blue-green wings and tail. There are large white markings on the primaries, clearly visible in flight. The feet and bill are black.

Black-billed Magpies range in the north from coastal southern Alaska, central British Columbia, and the southern halves of Alberta, Saskatchewan, and Manitoba, through the Rocky Mountains down south to all the Rocky Mountain states including New Mexico, Colorado, Wyoming, Idaho, and some bordering states as well. The range extends as far east as Minnesota and Iowa, but is thought to be limited further east by high temperature and humidity. Black-billed Magpies frequent open country with thickets and scattered trees, especially riparian groves. They can be found within cities and suburbs as well.

They become quite cheeky at the I-5 corridor rest stops! But I rarely drive that way these days.

Thanks Karen. I had to stop and start the car at least a dozen times, before I found a Magpie willing to sit still. It definitely tested my patience!

Nice shot! I was there last month and none of them would hold still... we started to park the car a dozen times!

Love the iridescence in the feathers!