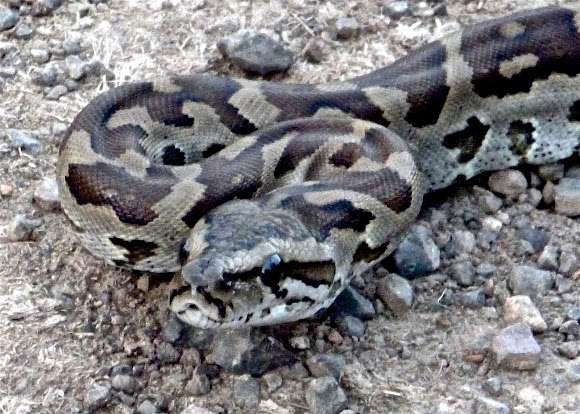 The reserve lies within the transitional zone between two biogeographic regions, the dry thorn savannas of the west, and the moister coastal thickets of the east.

Africa's largest snake and one of the six largest snake species in the world (along with the green anaconda, reticulated python, Burmese python, Indian python, and amethystine python), specimens may approach or exceed 6 m (20 ft). The southern subspecies is generally smaller than its northern relative. The snake is found in a variety of habitats, from forests to near deserts, although usually near sources of water. The snake becomes dormant during the dry season. The African rock python kills its prey by constriction and often eats animals up to the size of antelope, occasionally even crocodiles. The snake reproduces by egg-laying. Unlike most snakes, the female protects her nest and sometimes even her hatchlings.

Thanks Pamsai. I would really thing there would be an international board or some classification agency that would have the final say on things like this, but if there is, I haven't been able to find it. I had no idea butterflies were going through the same ordeal. Happy hunting.

Thank you Tukup for clarifying the ID of this spotting. Trying to keep up with the most recent re-classifcation of names is a nightmare. Never sure who has the most recent info. I run into this all the time ID-ing butterflies. So I guess I will just call this Python sebae natalensis. Cover all bases ! Thanks...

Hi Pamsai. You may be right. Sorry if I misled you. I consider "natalensis" to be a subspecies: Python sebae natalensis as Wiki points out: "Some consider the more southerly population of this snake to be a separate species, Python natalensis, while others consider this population to be a subspecies" https://en.wikipedia.org/wiki/African_ro... The Reptile Database has raised it to species level http://reptile-database.reptarium.cz/spe... I am forever going through this with the 80+ species we have in our area. With the new DNA testing available many snakes are being re-classified, but I cannot find out who the final authority is. NP Ranger AshleyT may be able to clarify this as I suspect she is much more of a specialist than I. But, yes, it is a beautiful snake!

Thanks Tukup...
What about the Southern African Python, Python natalensis ? Several folks in iNaturalist think this is P. natalensis... ans as Swaziland is within South Africa, this could be possible. Whatever it is, it's beautiful !