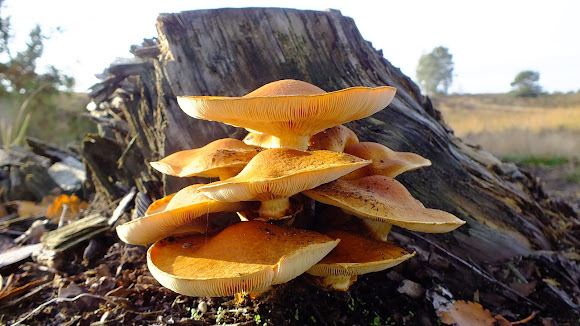 The cap diameter of Gymnopilus junonius usually ranges from 4 to 20 cm, although exceptional specimens to 30 cm are encountered occasionally; initially convex with an in-rolled margin, it eventually flattens but often retains a slight umbo. Radial orange or apricot-coloured fibres on a yellow or sienna background give the cap of the spectacular rustgill an overall golden appearance, which darkens towards orange brown as the fruitbody ages. The colour of the cap flesh is cream to straw-yellow, and it is firm and quite thick. A yellow cortina covers the gills of the immature fruitbodies, breaking and shriveling to leave fragments around the rim of the cap and around the stipe. The crowded gills of Gymnopilus junonius are adnate with broad attachment to the stipe. They are straw yellow to buff at first, changing to a bright rusty colour as the spores mature. The robust stipe of the spectacular rustgill is the same colour as the cap. Its surface is fibrous below the ring, which soon gathers spores and turns rusty brown. At the base, the stipe is either bulbous or clavate, and the stem is solid with yellow flesh.