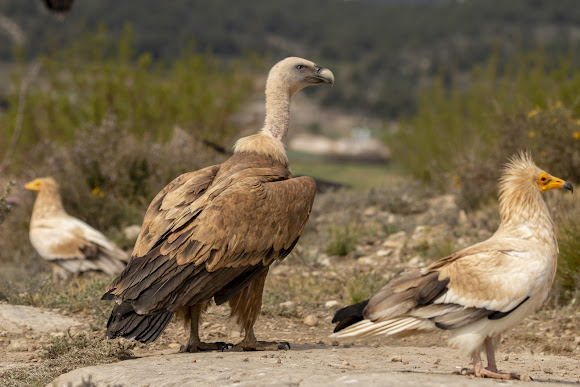 The Griffon Vulture seen here interacting with a pair of Egyptian Vultures and a number of Ravens.The male Egyptian arrived first followed by the female. Withing a few minutes a wake of Griffons followed accompanied by a dozen Ravens The Griffons 'mobbed' the Egyptians driving them away from the food scraps The Griffon vulture is sand-coloured to dark brown, with a white head, neck and ruff. The primary- and tail feathers are dark brown to black. Young birds have a brown ruff and are darker in colour. The wings are long and wide and are resemble fingers.

They forage in groups and breed in colonies on steep cliffs. Video here:- https://youtu.be/tBoI0EjrdTY Could not save it to this spotting?

Following a decline in the 20th century by poisoning, hunting and decreasing of food supplies, in recent year the species has increased dramatically in some areas, particularly in Spain, the French Pyrenees and Portugal. In Europe, the breeding population is between 19.000 and 21.000 pairs, with around 17.500 pairs in Spain and approximately 600 in France.

Like the focus on the lovely plumage in the fourth photo. Great spotting - Congratulations on the SOTW !

Congratulations Stephen, this great series has been voted Spotting of the Week! Photographic excellence, together with great notes combining observations and interesting conservation information, won you the vote. This is a great example for our 2019 Photo Competition, and an important highlight on the role of vultures.

"Vultures battle for food in our Spotting of the Week! Recognizable by its white head and neck ruff, this large Griffon vulture (Gyps fulvus) was observed mobbing a pair of smaller Egyptian vultures (Neophron percnopterus) away from food scraps. After seeing some sharp decline in the 20th century caused by poisoned baits, hunting and decreased availability of carcasses, in recent year Griffon vultures have dramatically increased in numbers in some areas through conservation efforts. Spain has the largest colony of Griffon vultures in all of Europe. The Egyptian vulture is endangered due to hunting, accidental poisoning, and collision with power lines.

This spotting is entered in our 2019 Best Wildlife Photo competition, which has a special theme on species interactions. Check it out: https://buff.ly/2WIJPd8 "

Your spotting has been nominated for the Spotting of the Week. The winner will be chosen by the Project Noah Rangers based on a combination of factors including: uniqueness of the shot, status of the organism (for example, rare or endangered), quality of the information provided in the habitat and description sections. There is a subjective element, of course; the spotting with the highest number of Ranger votes is chosen. Congratulations on being nominated Stephen!

Re. your video, the Youtube field is broken at the moment and we need to fix it. The field for Vimeo still works. For Youtube you did the right thing by pasting the link in your notes.

Thank you Neil. We were in a Hide with one way glass - the Vulture tapped on it and it was quite intimidating.

An amazing series, Stephan. The 3rd photo looks like the bird is giving an interview. Excellent spotting.