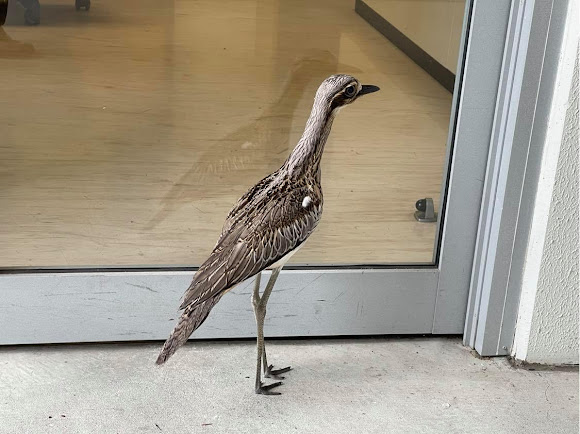 The bush stone-curlew, aka bush thick-knee, is a large, slim, mainly nocturnal, ground-dwelling bird that's endemic to Australia. Although related to oystercatchers, avocets and plovers, this is a terrestrial predator filling an ecological niche similar to that of the roadrunners of North America. Curlews specialise in hunting small grassland animals - frogs, spiders, insects, molluscs, crustaceans, snakes, lizards and small mammals are all taken. Curlews also nest on the ground, and that makes them particularly vulnerable. This species is classified as endangered in NSW and Victoria. They range throughout most of Australia and were formerly quite common, but have declined in numbers through habitat loss and predation by foxes and feral cats. Other states are reasonably secure. PS: See video links in notes.

Curlews have a broad habitat preference - open forest, eucalyptus woodland, rainforest edges, grassy plains, arid scrubland and along inland watercourses. They frequent open areas like golf courses and parkland as well. This spotting was at the entrance of a service building, at the Metroplex on Gateway estate, Murarrie, Brisbane. A wetland area is adjacent to this complex, although I reckon this bird would be just as happy in the car park!

I have worked in this area for over 15 years and have documented dozens of species at this location, but this is the first time I have ever seen a curlew on this estate. And it certainly hasn't been for the lack of looking either! The last photo in this set is where my story began, as I entered the building this morning at 5AM. This bird was determined to get inside, so as I was leaving for the day I had to leave a conspicuous note warning colleagues not to let him in. It made a loud and raspy "hissing" sound at me when I got too close, and then dropped its wings as part of the threat display before running off a short distance! When I returned later in the day, a friend had taken some more photos of the bird trying to enter via a different door (first 5 images). Was it besotted with it's own reflection perhaps? Check out my mate's video. Many thanks, Ben Koeleman.... https://youtu.be/jWSzbZWc5-4 ............... PS: I'm sure there are many Australians who would not recognise a curlew if they saw one. They might recognise their call though. Curlews have the most eerie cry that no doubt has terrified many locals in the dead of night, and every time I hear them calling I chuckle to myself in sheer delight ;) .... https://www.youtube.com/watch?v=RZWHUU41... And here's a good video of a threat display. This is the sound that my spotting was making to me (from 1:18 mins).... https://www.youtube.com/watch?v=jobVhHWt...

Marek Koszorek a year ago

James McNair a year ago

Thanks for your comment, Muckpuk. I'm so glad you watched the videos. You have to see that threat display to believe it!

Hahaha I just listened to his threat sound. AMAZING! Don't want to hear that at night no for sure!
Congratulations on your SOTW

Many thanks, Dan. It certainly was an unexpected experience!

Dan Doucette a year ago

What a neat experience! Congrats Neil!

Many thanks, Tukup. An unusual setting for an unusual bird! It certainly is unique.

Thanks, everyone. I appreciate the congrats and glad you like the notes. They fill in all the gaps! Will pass on your congrats, Mark :)

Aha! I thought he must have a plan hanging around that door. When you see him again offer my congrats.

Congratulations, Neil. Loved the spottings and especially your notes.

Thanks, Zlatan. I was still half asleep when I walked into this spotting. I'm grateful to my friend who took photos later in the day. Far better than I could manage at 5am.

Congrats Neil; it was a great spotting and the story!

Many thanks to you and the rangers who voted for my spotting, Michael. I'm honoured! :-)

Congratulations! Your bush stone-curlew spotting has been voted Spotting of the Week! Thank you for sharing such detailed notes on your encounter with this unique bird species in an urban environment! The Project Noah community looks forward to seeing your next nature discovery.

Thanks for the nomination, Machi. Fingers crossed :)

Me too, Mark. This city slicker could very well have rellies in Nimbin too!

I just love a stoned curlew.