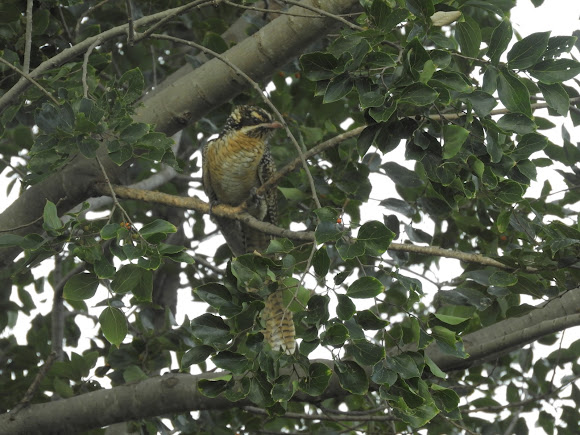 Female:- Head is glossy-black with a blue-green tinge. The rest of the upper parts are brown tinged with bronze-green; Indistinctly barred and tipped white feathers; Upper tail coverts, tail and flight feathers are crossed with white bars. The chin and sides of face are dull black with a pale buff line from base of bill to throat. Centre of the throat and neck are washed cinnamon to buff and are often mottled black. Rest of the underparts and under wing coverts are off-white to pale buff barred dusky brown. Red eye. Cream-gray bill. Gray-brown feet.

Riverside scrubs; Monsoon thicket; Rain forest and dense pockets of eucalyptus. This Koel was hanging around my backyard, as I believe that one of the 'host' birds:- Blue-faced Honeyeater; Friarbirds, had gained an 'extra' egg in the nest. The tree is a Chinese Celtis.

I have found this to be quite a shy bird. In the mating season, the female will emit a whirling whistled crescendo resembling or in response to the males crescendo, followed by four loud shrieking whistles. Also will hear gurgles, chuckles and croaks. Reference:- Readers Digest Complete Book of Australian Birds.