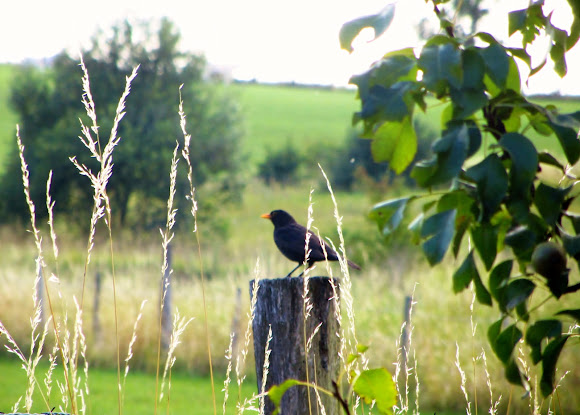 The common blackbird of the nominate subspecies T. m. merula is 23.5 to 29 centimetres (9.25 to 11.4 in) in length, has a long tail, and weighs 80–125 grammes (2.8 to 4.4 oz). The adult male has glossy black plumage, blackish-brown legs, a yellow eye-ring and an orange-yellow bill. The bill darkens somewhat in winter. The adult female is sooty-brown with a dull yellowish-brownish bill, a brownish-white throat and some weak mottling on the breast. The juvenile is similar to the female, but has pale spots on the upperparts, and the very young juvenile also has a speckled breast. Young birds vary in the shade of brown, with darker birds presumably males. The first year male resembles the adult male, but has a dark bill and weaker eye ring, and its folded wing is brown, rather than black like the body plumage. (Wiki)

The common blackbird breeds in temperate Eurasia, North Africa, the Canary Islands, and South Asia. It has been introduced to Australia and New Zealand. Populations are sedentary in the south and west of the range, although northern birds migrate south as far as northern Africa and tropical Asia in winter. Urban males are more likely to overwinter in cooler climes than rural males, an adaptation made feasible by the warmer microclimate and relatively abundant food that allow the birds to establish territories and start reproducing earlier in the year. Common over most of its range in woodland, the common blackbird has a preference for deciduous trees with dense undergrowth. However, gardens provide the best breeding habitat with up to 7.3 pairs per hectare (nearly three pairs per acre), with woodland typically holding about a tenth of that density, and open and very built-up habitats even less. They are often replaced by the related Ring Ouzel in areas of higher altitude. The common blackbird occurs up to 1000 metres (3300 ft) in Europe, 2300 metres (7590 ft) in North Africa, and at 900–1820 metres (3000–6000 ft) in peninsular India and Sri Lanka, but the large Himalayan subspecies range much higher, with T. m. maximus breeding at 3200–4800 metres (10560–16000 ft) and remaining above 2100 metres (6930 ft) even in winter.[6] This widespread species has occurred as a vagrant in many locations in Eurasia outside its normal range, but records from North America are normally considered to involve escapees, including, for example, the 1971 bird in Quebec.[26] However, a 1994 record from Bonavista, Newfoundland has been accepted as a genuine wild bird, and the species is therefore on the North American list. (Wiki)

This common and conspicuous species has given rise to a number of literary and cultural references, frequently related to its song. (Wiki)