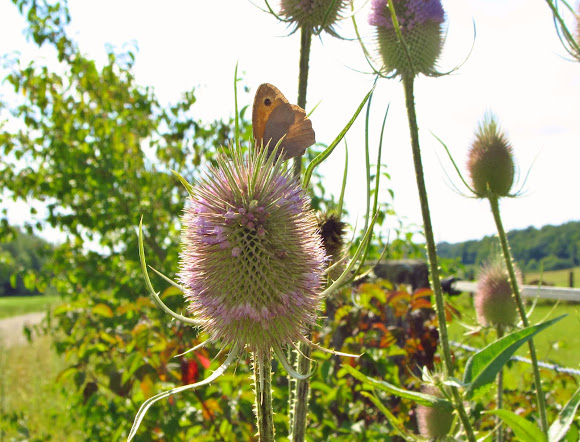 There is marked sexual dimorphism in this species. Males are less colorful, with smaller eyespots and much reduced orange areas on the upper forewings. They are also much more active and range far about, while females fly less and often may not away from the area where they grew up. A variable number of smaller eyespots are usually found on the hindwing undersides. These may number up to 12 per individual butterfly, with up to 6 on each wing. The factors that govern polymorphism in this trait are not resolved, although a number of theories have been proposed (Stevens 2005). On the other hand, the evolutionary significance of the upperwing eyespots is more obvious: The more active males have a markedly more cryptic upperside pattern, whereas the females have more opportunity to present their eyespots in a sudden display of colors and patterns that presumably startle predators so the butterfly has a better chance of escaping. (Wiki)

Because of the vast distribution habitats are hard to define but broadly are forest edge, forest-steppe and meadow steppe habitats up to 2,000 m above sea level, cultivated lands (meadow, forest plantations, parks, orchards).