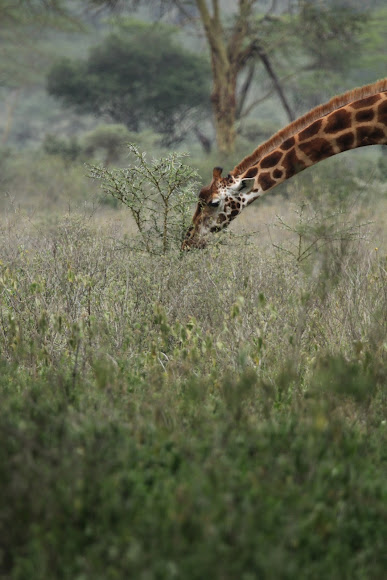 The Rothschild's giraffe is the most endangered giraffe in the world. Though its status as a subspecies was debated, recent genetic evidence has confirmed it; however, visually they are very different from the vastly more common Masai giraffe. In all individuals of the species, there are no markings from the knee down (see photograph 2); unlike other giraffes, they have three visible ossicones (horns) on their head, and their markings as a whole are very different from other subspecies of giraffe. According to the IUCN Red List, they are listed as endangered, though their population is fast approaching the threshold for critically endangered-- whether they meet it or not is dependent on the number of surviving individuals (if any) in South Sudan. No wild population of theirs contains more than 250 individuals, so they are at risk of hybridisation. However, as visible in photographs 4 and 6, we saw numerous young giraffes, evidence of breeding, and thus the overall prospect for the species looks bright.

Giraffes are terrestrial, and feed on the leaves of acacias: their elongated necks is an adaptation for that purpose. The Rothschild's giraffe is mainly found within acacia forests and only within the open when travelling from one place to another.

As far as I am aware, this is only the second spotting of wild Rothschild's giraffes on Project Noah, and the only one from Lake Nakuru National Park.

Thank you mynatureexperiences and armadeus.4! This was my favorite spotting, and it was an honor to see them. They are such fascinating and beautiful animals, and it was truly an experience of a lifetime.

Wow...what an incredible experience duttagupta35504!!! Thank you for sharing all of that information and the amazing pictures :)

What an amazing spotting...excellent pictures too! :)