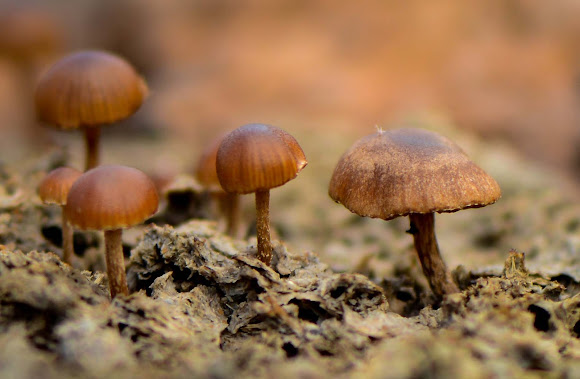 Tiny tiny mushroom that probably grew in the last week due to some recent rains. I did not see any dried or dead examples. Strophariaceae family.

I was very happy to find this fungi, but I had a hard time to figure out what it was growing on. At my first investigation, I thought that it was some kind of lichen. But later on I found the same fungi on an other place and after an other investigation I realized it was growing on feces... Cool and eeeuuu! haha! I did not know that was possible, and I thought fungi-growth process was too slow to grow on feces... I was proved wrong, and I like it :) Deconica is a genus of mushrooms in the family Strophariaceae. It was formerly considered synonymous with Psilocybe until molecular studies showed that genus to be polyphyletic, made of two major clades: one containing bluing, hallucinogenic species, the other non-bluing and non-hallucinogenic species. This belongs to the non-hallucinogenic species.

Thank you António and Gully! Interesting reading! It really looks like a Deconica variety. I will go for that! :)

Sorry Tiz for the mistake,Gully is "the real specialist" after reading his comment i checked Gully suggestion and i found this,i think Gully nail it :-)
https://www.google.pt/url?sa=t&rct=j...

Fungi are the primary decomposers of dung! Many species of agaric grow right off dung including mushrooms from the genera Stropharia, Deconica, Psilocybe, Panaeolus, Coprinellus, Coprinopsis, Coprinus (the Coprin part comes from the Latin for dung apparently). Probably more I can't think of right now.

I believe yours are of the Deconica variety. (Laccaria aren't dung dwellers.)

Very nice capture Tiz,at first site i would say it is a common deceiver,but you are in Africa so i have checked in a south african mushroom list and yes,the common deceiver(Laccaria laccata) exists in Africa ,it's my best choise,iam not 100% sure,but almost :-)