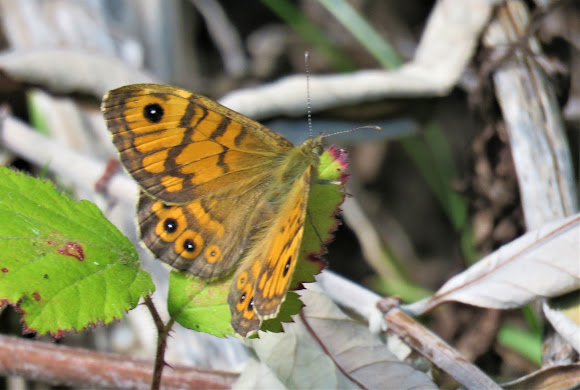 Here, the female Wall or Wall brown, a butterfly from Nymphalidae family, about 5 cm in wingspan. I found french names of this species, very interesting and funny: female is called 'Mégère', and the male 'Satyre'. While both names originate in Greek mythology ('Megere' is one of the three Furies; and Satyre is, well, Satyr...), both words have another meaning in day-to-day language - 'Megere' is a mean woman, or shrew; while Satyre is... I'll leave to reader's imagination what Satyr could be used for...

All credits go to my son, who snapped few pics of these during one of our short excursion through one of protected natural coastal areas while in Brittany this summer. He, even though not interested in engaging more in PN, agreed to share it here under my account without mentioning his name, but I just wanted to mention his work.