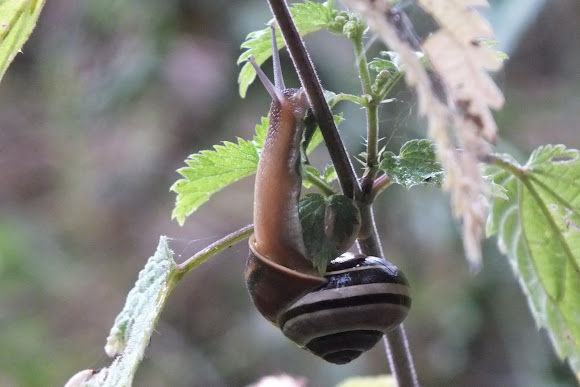 The grove snail or Brown-lipped snail is a species of air-breathing land snail, a terrestrial pulmonate gastropod mollusc. It is one of the most common species of land snail in Europe and has been introduced to North America. Cepaea nemoralis is among the largest and because of its polymorphism and bright colours one of the best known snails in Western Europe. The colour of the shell of Cepaea nemoralis is very variable, reddish, brownish, yellow or whitish, with or without dark brown colour bands. Apertural lip usually dark brown, rarely white. The umbilicus is narrow but open in juveniles, closed in adults. For every colour variant names were established in the 1800s; this was later abandoned. The surface of the shell is semi-glossy, and it has from 4½ to 5½ whorls. The width of the shell is 18–25 mm. The height of the shell is 12–22 mm.

Cepaea nemoralis is a very common and widespread species in the Western Europe, occupying a very wide range of habitats from dunes along the coast to woodlands with full canopy cover. It lives in shrubs and open woods in plains and highlands, dunes, cultivated habitats, gardens and roadsides. It can be found up to 1200 m in the Alps, 1800 m in the Pyrenees, 900 m in Wales, 600 m in Scotland. It feeds mainly on dead or senescent plants. It is not noxious to crops.