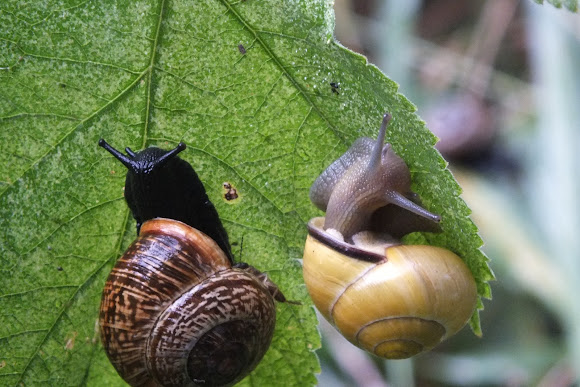 Cornu aspersum, known by the common name Garden snail, is a species of land snail. As such it is a terrestrial pulmonate gastropod mollusc in the family Helicidae, which include the most commonly familiar land snails. Of all terrestrial molluscs, this species may well be the most widely known. The adult bears a hard, thin calcareous shell 25–40 mm in diameter and 25–35 mm high, with four or five whorls. The shell is variable in color and shade but generally is dark brown, brownish golden, or chestnut with yellow stripes, flecks, or streaks.The aperture is large and characteristically oblique, its margin in adults is white and reflected. Cepaea nemoralis, the Grove snail or Brown-lipped snail is a species of air-breathing land snail, a terrestrial pulmonate gastropod mollusc. It is one of the most common species of land snail in Europe and has been introduced to North America. Cepaea nemoralis is among the largest and because of its polymorphism and bright colours one of the best known snails in Western Europe. The colour of the shell of Cepaea nemoralis is very variable, reddish, brownish, yellow or whitish, with or without dark brown colour bands. Apertural lip usually dark brown, rarely white. The umbilicus is narrow but open in juveniles, closed in adults. For every colour variant names were established in the 1800s; this was later abandoned. The surface of the shell is semi-glossy, and it has from 4½ to 5½ whorls. The width of the shell is 18–25 mm. The height of the shell is 12–22 mm.

The two species share many of the same habitats, such as woods, dunes and grassland. Cornu aspersum is native to the Mediterranean area and western Europe, but whether deliberately or accidentally, humans have spread it to temperate and subtropical areas world wide. The native distribution of Cepaea nemoralis is Western Europe and Central Europe.