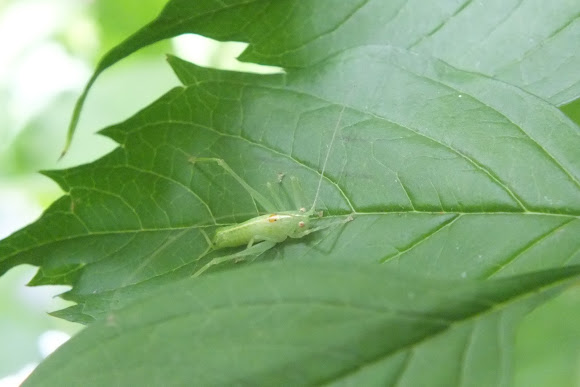 The adult males grow up to 28–36 millimetres long, while females reach 32–42 millimetres. This insect is most often completely green but there are specimens completely yellowish or with yellow legs, excluding a rust-colored band on top of the body. The organ of the stridulation of the males is generally brown. Tettigonia viridissima is distinguished by its very long and thin antennae, which can sometimes reach up to three times the length of the body, thus differentiating them from grasshoppers, which always carry short antennae. The morphology of both sexes is very similar, but the female has an egg-laying organ that can reach a length of 23–32 millimetres. It reaches the end of the elytra and is slightly curved downward. The larvae are green and as the imago show on their back a thin brown longitudinal stripe. The ovipositor can be seen from the fifth stage; the wings appear in both genders from the sixth stage.

This species can be encountered from Europe to Mongolia, especially in meadows, grasslands, prairies and occasionally in gardens.