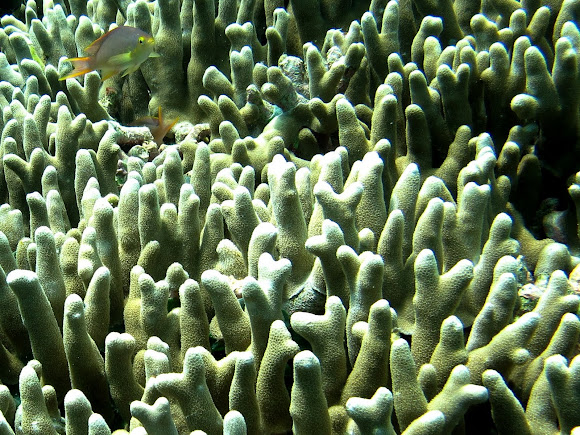 Porites species are the opposites of acroporids. They are slow growing, hardy species that tolerate a range of environmental stresses. For this reason they will be often be found growing under difficult conditions such as mangroves where light and nutrients are extremely fluctuating. Some scientists argue that it is because Porites are so slow growing that they are so hardy. Their skeleton is denser than with for example acroporids which means that they don't undergo fatal coral bleaching as readily. Like other branching hard coral species, porites cylindrica provides an excellent habitat for damselfish and anthias (as seen in the top left corner in this photo).

Under periods of elevated temperatures it is common to see paling in Porites species which is believed to be a protective mechanism as they expel zooxanthellae that produce harmful toxins when under stress avoiding a concentration of these toxins (hydrogen peroxide).