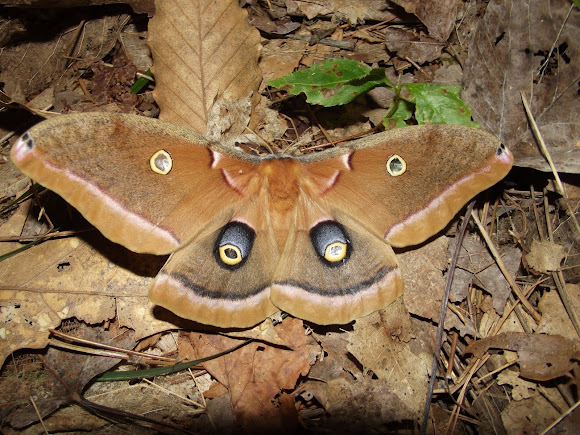 The Polyphemus Moth (Antheraea polyphemus) is a North American member of the family Saturniidae, the giant silk moths. It is a tan colored moth, with an average wingspan of 15 cm (6 inches). The most notable feature of the moth is its large, purplish eyespots on its two hindwings. The eye spots are where it gets its name – from the Greek myth of the Cyclops Polyphemus. The caterpillar of the Polyphemus Moth can eat 86,000 times its weight at emergence in a little less than two months. It is widespread throughout much of North America, from southern Canada to parts of Mexico.

The life cycle of the moth is much like that of any other saturniidae species. It lays flat, light brown eggs on the leaves of a number of host plants, including: Betula, (birch) Salix, (willow) Quercus, (oak) Acer, (maple) Carya, (hickory) Fagus, (beech) Gleditsia triacanthos, (honey locust) Juglans, (walnut) Pyrus, (pear and quince) Prunus, (plum, peach, apricot, cherry, etc.) Sassafras Citrus, (orange, grapefruits, lemons, limes, etc.) Ulmus americana, (American elm) Differentiating between sexes of this species is very easy. The most obvious difference is the plumose antennae. Males will have a very bushy antennae while females will have a moderately less bushy antennae. The male's bushy antennae is used to detect pheromones released by unmated females. Another difference is that the females will be slightly larger in the abdomen due to carrying eggs. There is a surprising amount of variation within this species. Color patterns can range from a reddish-cinnamon to a dark brown but are almost always a shade of brown.