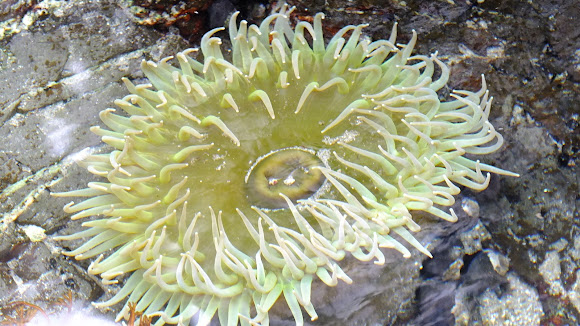 Giant green anemones have tube-like, columnar bodies, topped with a round cap bearing a crown of numerous tentacles. Column diameter may be up to 17 cm (tentacular cap crown diameter up to 25 cm) and they may grow to be as tall as 30 cm. The tentacular crown has at least 6 rings of tentacles with a mouth in the center. The tentacles contain stinging cells called cnidocytes, which hold venomous organelles called nematocysts, used to paralyze and capture prey, as well as to defend against attackers. Giant green anemones have a basal pedal disk, used to attach the animal to substrate (usually a rock or coral). Once attached to the substrate, they typically do not move; however, an anemone can use its foot to move to a new location if conditions are unfit for survival. The column is dark green to brown in color, with irregular tubercles on the surface. Disk and tentacles are green or blue to white, depending on how much sunlight the anenome receives. This is because the anemone has symbiotic algae living inside its tissues. When sunlight is plentiful, the algae grows, producing a bright green color. If the animal is in shade, these algae will be reduced in number or absent.

Giant green anemones are found in tide pools and intertidal/subtidal zones along rocky shores, at depths up to 15 m. They are typically seen attached to substrate (including manmade structures such as concrete pilings) in locations with cold waters and high wave activity. In captivity, they are known to thrive at water temperatures between 15.0-22.2° C. They are commonly found in mussel beds.

Hairy one spotting for tropical