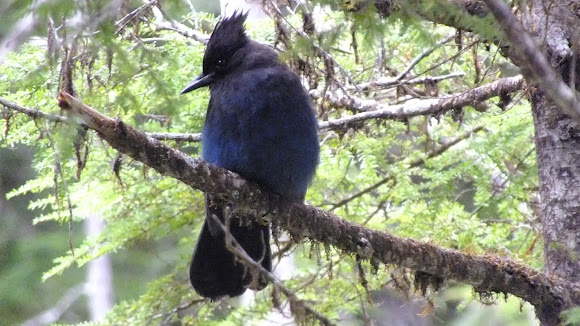 The Steller's jay is easy to recognize because of its dark blue and black plumage and prominent, expressive head crest. The bill is long, straight, and black, and in flight, the wings show somewhat blunt, rounded tips. Males and females are similar with a black or gray-black head and crest, sometimes showing narrow white or light blue streaking on the forehead and above the eye, though these streaks are highly variable and may not always be visible. The neck, throat, back, and upper chest are black or dark gray and the underparts are a rich blue. The wings and tail are a brighter blue or bluish purple with thin black barring in a ripple pattern. The legs and feet are black, and the eyes are dark. In some subspecies, the crest and back can appear more blue than black or gray. Juveniles look similar to adults but have less defined markings and more gray in their plumage, especially on the back and head.

Steller’s jays can be found at lower mountain elevations throughout western North America, including mountainous regions of Mexico and Central America. The most widespread populations are in the Rocky Mountain region including Colorado, Wyoming, Montana, Utah, Idaho, Washington, Oregon, and northern California, as well as into British Columbia. These birds prefer mixed pine and oak or pure coniferous forests, but they will also frequent campgrounds, yards, and urban parks in appropriate habitats.