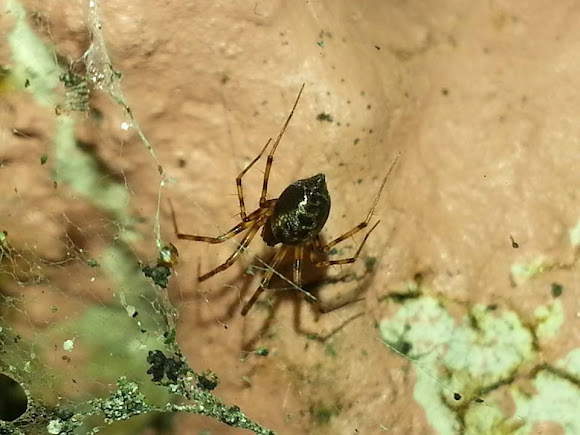 Most of the spiders of this family weave sheet like webs and the spider hangs under the web. Above the sheets the spider inserts scaffolding of threads. Insects fly against these strands and falls onto the web where they are caught. The spider bites through the web to paralyze her prey. They are referred too as dwarf spiders. In the British Isles, they are called money spiders. Nearly half of the spiders in Europe are member of this family. Their size is between 4 - 10 mm. Most of them have dark colours. Members of this family occupy almost every spot on the world, from the Himalaya to beaches, from Antarctica to the tropical forests. They reach these places because the spiders can fly by wire, called "ballooning". The spider raises her abdomen and releases a thread in the breeze that grows longer and longer until the upward lift is sufficient and the spider is lifted. They can reach heights of up to 10000 meter and are transported to every spot on the world. They are =

hey are often one of the first inhabitants of a devastated area like after the eruption of the Krakatau in August 1883. In May 1884 scientist already reported microscopic spiders spinning their webs.

One of the very many species of the Family Linyphiidae that i have discovered in my 3 metre concrete, arthropod wonder-land! This one was about 3-4 mm hiding under a pipe for shelter.

Please consider adding this to the Spiders of the British Isles mission http://www.projectnoah.org/missions/2977...

thanks for the favorites!

Of course At certain times of the year many millions of money spiders use the method "ballooning" (described above) to move to new areas. This is how spiders occasionally get caught in people's hair - it was thought when this happened the person would be coming into money - hence the name money spider! For extra good luck you are supposed to spin the spider around your head by its web before letting it go! i hope this helps!

thanks for the favourite!