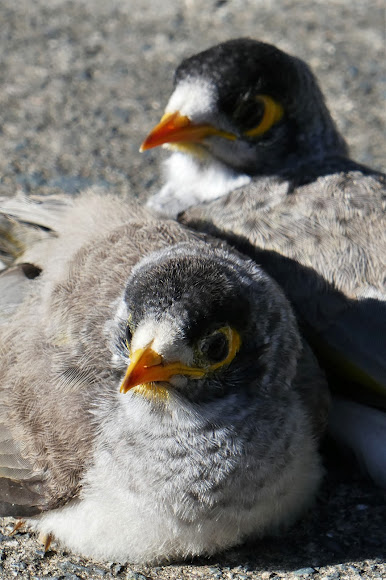 This pair of fledged sibling miners was spotted on the footpath, snuggling together in the mid-afternoon sun. Like all the adult birds that have grown up in this area, these young birds have little fear of people, and this can put them in harms way. I have physically picked these birds up and placed them into the trees or shrubs for fear they would be squished by cars or trodden on by people. One of them followed me into the building! Fledgling birds can utter 85 to 100 'chip' calls in a minute, and these two have been squawking away ceaselessly all week! They would now be a few weeks old. Feeding the little ones is a communal activity, and a full-time one too - the adults are kept busy! The references have loads of information on this species.

Spotted in the trees, gardens, and car park at the Metroplex on Gateway estate, Murarrie, Brisbane.

Despite these birds being so common, I find their interactions with one another, with people, or with any living creature that is not a noisy miner, to be very entertaining, and their social structure is particularly interesting. From Wikipedia.... "This is a gregarious species.... Within a colony, a male bird will occupy an 'activity space', which will overlap with the activity spaces of other males. Males with overlapping activity spaces form associations called 'coteries', usually consisting of 10 to 25 birds. Coteries are the most stable unit within the colony. The birds also form temporary flocks when engaged in the same activity. These flocks, called 'coalitions', usually comprise five to eight birds, although coalitions of up to 40 birds can occur when mobbing a potential predator. Membership of the coalition changes frequently as individuals leave the group as it passes beyond the boundary of their activity space, or the activity ends or changes, as when the breeding season begins. Females use activity spaces that overlap with those of male birds, but not other females, so that females will join coalitions with males in their area, but only rarely will there be more than one female in the coalition. The exclusivity of female activity spaces leads to young females being driven out of the colony in which they were born, and also makes it difficult for them to gain a place in a new colony. A study of banded nestlings that survived in one colony until the next breeding season, found that they were all male birds, suggesting that all female nestlings had died or left the colony. Emigration of males does not seem to occur until the population density of the colony reaches a critical level."

Thanks, Leuba and Liana. Not as bad as magpie swooping though, Liana!

These birds are up there in my favourites list :D Absolutely adorable...not so much when they're swooping though ha ha Lovely series Neil. Thank you for sharing :)

Thanks, Mark. My favourites I appreciate the nomination :)

Your favourites Neil and you know it.

I like the sound of that, Ava. Thank you :) Almost as lively as coming nose to beak with one of the swooping adults. Screams and/or profanities usually follow!