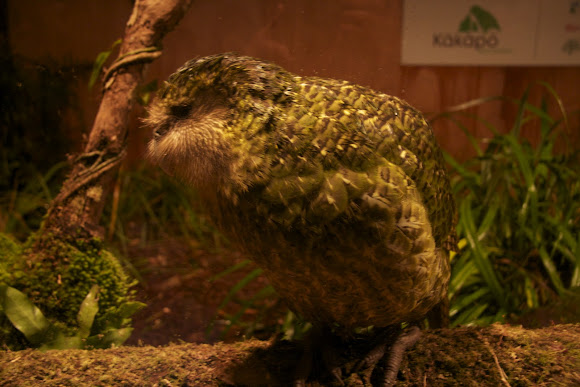 Kākāpō - one of the world's rarest birds. Only 131 birds remain, though numbers have increased in recent years due to the wonderful work of the Kakapo Recovery Group. It is a flightless, nocturnal parrot - making it very unusual. It is also the heaviest parrot. It is related to the other NZ parrot species - the Kea and Kaka.

Once found throughout New Zealand in native bush, now confined to a small number of offshore, predator free island sanctuaries.

This particular bird is called Sirocco. The Kakapo Recovery Group give every bird a name (once they've got past fledging). It is famous for having appeared on a TV show called "Last Chance to See" and 'making friends' with Mark Carwardine. I've seen Sirocco twice - once on Ulva Island, near Stewart Island off the NZ South Coast. However, this spotting was in the Zealandia conservation park in Wellington, NZ where he was on public display during the Rugby World Cup.

Congratulations Andy and thanks for all the information!

Thanks for sharing the photo btw and congratulations !!

I think the recovery group is doing a great job for this amazing bird with hopefully a promising future. I love the way the male birds slowly puff their chests with the booming sounds...I wish them all the best !

Wow. Thanks Peter - the Kakapo really needs all the publicity it can get. It hasn't been a good year for them so far with a couple of older birds dying and the Rata not fruting due to poor weather. The population has declined this year and no breeding is expected.

@Lori.tas - Sirocco was on Ulva Island for about a month. They put in a special enclosure for him on the island and you had to pay to visit it. We saw him on the 20th October 2006 - you can read what I wrote about it for my website at the time below:

It was time for a Kakapo Encounter.

...A Kakapo is a very rare, unusual bird. There are currently only 86 Kakapo left in the world. All of these are closely managed by the DoC and the Kakapo Recovery Group. The public NEVER get to see them. That was until September 2006. A single Kakapo, Sirocco, was taken to Ulva Island and visits by the public in arranged guided groups were allowed for a period of six weeks before the Kakapo breeding season begun.

So. Why is a Kakapo so special?

There are many reasons for this. They are the world's only nocturnal parrot, the world's largest parrot (over 65cm in length), the heaviest parrot (up to 3.5 kilograms) and the only parrot with an arena breeding system. This is where a male bird constructs a bowl from where he will make a very deep-pitched 'booming' sound. The bowl amplifies the sound to enable the Kakapo to attract mates. They are also the only flightless parrot. 100 years ago, Kakapo were so common that you could shake a tree and Kakapos would fall out of them like coconuts. This certainly isn't the case anymore and for a while during the 1970s, they were thought to be extinct.

Anyway, being a fan of New Zealand native wildlife and parrots, and coincidentally being on holiday in Southland at the right time, I couldn't turn down a visit to see Sirocco.

The trip to Ulva Island was led by a woman called - funnily enough - Ulva.

The little Aurora Charter vessel left Oban Harbour a little behind schedule with a party of about 30 Kakapo watchers. The party was a real mixed bag. Middle aged people, kids, backpackers, the Kakapo fans and just those who were curious. Considering how rough the crossing of the straits had been, the sailing to Ulva Island was very quick and calm.

By the time we got to Ulva, the dark was rapidly encroaching. The tension was slowly building as we walked inland towards the hidden Kakapo enclosure. Eventually, we took a walk off the beaten track and into the bush. After five minutes off the track, we could see a dim light up ahead, shining out of the increasing veil of darkness.

The enclosure was about 3 to 4 metres in diameter. The walls were made of wood up to about a metre in height. Over this, there was about 3 metres of Perspex that could be seen through. There was no canopy over the enclosure as Sirocco obviously couldn't fly to escape. And there he was. Sitting on a branch across the face of the Perspex. A huge green and black streaked feathery mess with a bright white disc of feathers on his face. He was much bigger than I'd expected. His face shone out in the dark as he paced up and down the branch, parading for admiring onlookers.

We stood and watched and took flashless photographs for a fair while. Then Sirocco's handler went into the pen to feed him some grapes and give him his daily weigh in. He clocked in at 3.16 kilograms. A big, heavy bird.

He then proceeded to clamber, climb and wander around his pen for the onlookers. Then he started to puff his chest out and make some very deep gurgling noises. We were informed that this was 'pre-booming' - setting himself up for the coming breeding season.

Then, more bizarrely, we were given the 'opportunity' to smell Kakapoo. This is because it smells very sweet and vaguely herby. Interesting, if still somewhat unpalatable.

Then it was time to go. Quickly as we'd arrived, it was time to leave. I pressed my nose up against the Perspex and Sirocco replied in kind. I then reluctantly left.

Back on the boat, we were shown and allowed to feel some Kakapo feathers and find out for ourselves just how soft they are. The rest of the boat journey back to Oban was subdued and quiet. Not much was said. Before too long, we were back at port...

How beautiful! He looks very wise. Thanks for sharing pictures of this rare bird!

Hey Andy, when was Sirroco on Ulva? I was there about five years ago and there weren't any Kakapo on it.

Andy, it so sad to hear about the fate of these amazing parrots. I'm very glad to learn about all the wonderful work and efforts of the Kakapo Recovery Group. Your spotting absolutely deserves to be highlighted as Spotting of the Day.

"The Kakapo is a flightless, nocturnal parrot that was once found throughout New Zealand. It is now one of the world's rarest birds and only 130 or so remain in the wild."

Fantastic photos.. This is an very interesting bird