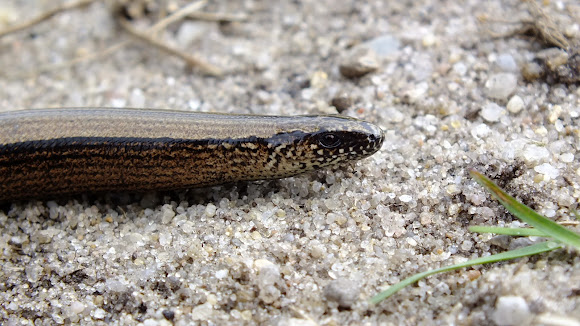 The slow worm is a smooth, elongate legless lizard, with a snout-vent length (SVL) of between 120-200 mm. Adults are typically gray-brown to copper in color, while juveniles are pale gold or silver with dark sides and ventral coloration. Sexual dimorphism is observed in this species. Females have dark stripes along the back and sides of the body, while males lack stripes. A small percentage of males have distinctive blue spots on the dorsal surface. A young slow worm will develop most rapidly in its first year after birth, growing to an average snout-vent length (SVL) of 100 mm. In subsequent years, it will continue growing at a slower rate until it reaches adult size. The slow worm is an ovoviviparous species. Eggs develop inside the female, and the young are born live. The breeding season and gestation period of the slow worm vary across its range.

The slow worm is semi-fossorial, spending the majority of its time underground. It prefers a damp, cool environment, and its favored habitats include open woodland, grassland, and heath. Preferring to stay out of the open, the slow worm will often hide under stones or other surface debris. It generally spends the winter months in an underground burrow. As a result, the slow worm is difficult to observe in the wild, despite often living in close proximity to humans.