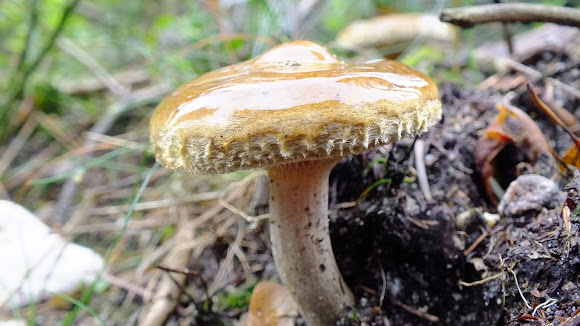 Initially convex, the ochre cap soon becomes centrally depressed, occasionally with a noticeable umbo, and gradually turns chestnut brown. The margin remains inrolled, hence the common name brown rollrim, and it usually has a fluted edge. Downy in dry weather, the cap surface is viscid when wet. Caps expand to between 5 and 12 cm when fully mature, and the downy surface becomes smooth when the caps are very old. Pale ochre at first, the gills gradually turn brown as the fruiting body ages. Rusty spots appear, and if the gills are bruised they very rapidly turn rusty brown. The crowded gills are deeply decurrent. 8 to 12 mm in diameter and typically 6 to 12 cm long, nearly always curved, the stem is more or less parallel sided and light ochre at first, becoming chestnut brown with age or if bruised.

Mycorrhizal with a wide variety of hardwoods and conifers, apparently also capable of existing as a saprobe on wood. Found in woods and in urban settings, growing alone, scattered, or gregariously.