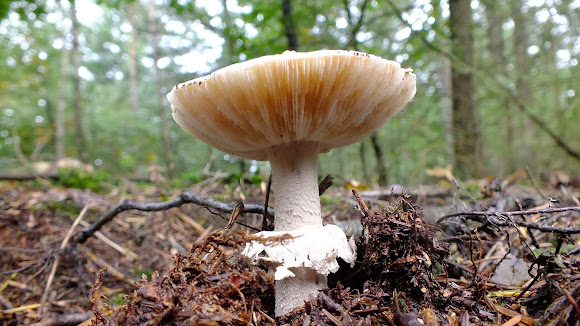 The mushrooms in Amanita include some of the world's best known and most beautiful fungi. Amanita species are recognized by their (usually) pale gills, which are free from the stem; their white spore prints; the presence of a universal veil that often creates a volva or other distinctive features on the stem; and their more or less dry caps (as opposed to the slimy caps in the related genus Limacella). Many species of Amanita have warts or patches on their caps, and many have a ring on the stem.

The great majority of amanitas are mycorrhizal, growing in the vicinity of coniferous and/or deciduous trees.

The cap of this mushroom looked rather peculiar to me. Perhaps it was just really rundown, because the gills also seem to be affected by a mold. The cap was warty, brownish at the center and fading into pure white at the margin. The white stem with large ring was about 10 cm long and covered with white scales. Not sure which species of fungus this is. Spotted in a broadleaf forest near Gortel, Veluwe, Holland. (sources: see reference)

Thank you, Neil! And I agree, Amanita mushrooms never ceases to amaze me.