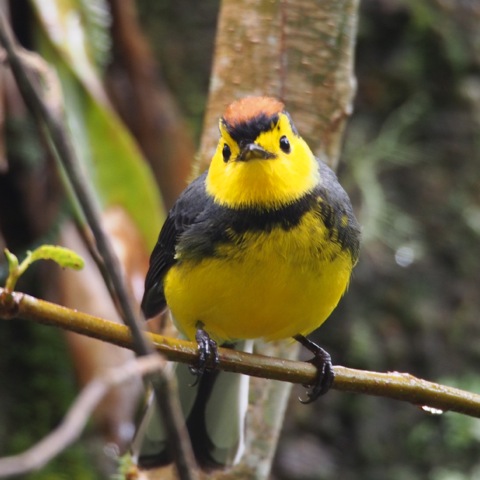 While walking through a mountainous forested area beside a river, this little bird followed me for a long while, checking me out and jumping around from tree to tree, branch to branch, always keeping me in sight. The Collared Whitestart or Collared Redstart (Myioborus torquatus) is a tropical New World warbler endemic to the mountains of Costa Rica and western Panama. Like other members of Myioborus, it is often called a "whitestart" rather than a "redstart".

Alpine forest beside a river in the Valley of the Quetzals, San Gerardo do Dota. The Collared Whitestart is common at heights between 1500 m and the timberline in mossy mountain forests, ravines, second growth, and adjacent pastures.

thanks Jakubko for the ID...

Interesting Anne. It was so obvious it was playing with me, jumping around me to get attention. Stopping every now and then and peering at me. Such a cute bird.

thanks akshaya, Dilan and Maria dB...

Lovely series of a beautiful bird

His behavior of following you is typical and they have earned the local name of "amigo de hombre" because of it :)