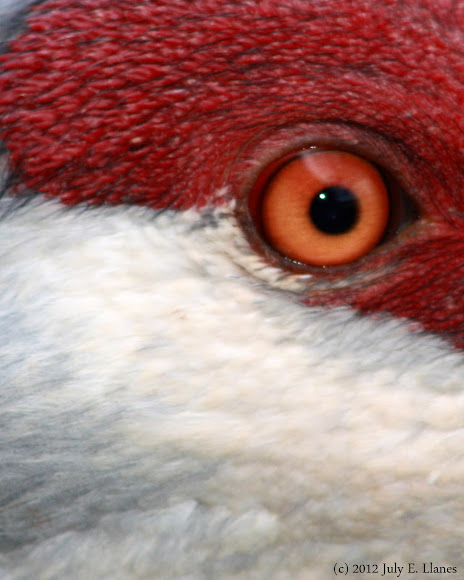 Adults are gray overall; during breeding, the plumage is usually much worn and stained, particularly in the migratory populations, and looks nearly ochre. The average weight of the larger male is 4.57 kg (10.1 lb), while the average weight of females is 4.02 kg (8.9 lb), with a range of 2.7 to 6.7 kg (6.0 to 15 lb) across the subspecies.[1][2] The Sandhill Crane has a red forehead, white cheeks and a long dark pointed bill. Its long dark legs trail behind in flight, and the long neck is kept straight in flight. Immature birds have reddish brown upperparts and gray underparts.[3][4] The sexes look alike. Size varies among the different subspecies. This crane frequently gives a loud trumpeting call that suggests a French-style "r" rolled in the throat, and they can be heard from a long distance.

Most sandhill crane populations nest in open grasslands, such as wet meadows, and freshwater marshes or bogs. There are six subspecies of sandhill cranes, and each typically nests in the open, wet grassland habitats of their region. The Cuban population of sandhill cranes (Grus canadensis nesiotes) is an exception, inhabiting dry, isolated regions, sometimes in rocky and mountainous terrain.

Love the third picture, where did you exactly find this bird?

BTW, Sachin,Thnx for the pictures, There were 18 of them. All lovely! looks like you had good winds for flying kites.

Thank you, thank you! :)
Nopayahnah----my backyard..:) There is a lake behind my house, and for the past 2 years we've had more and more beautiful visitors to the lake, :)....including gators, lol, which of course are nothing rare in Florida. For a while I swore the gators were eating the birds because hardly any birds were coming thru the seasons, but they started coming back and I have no idea why, but I love it. :)

There is Mission "Cranes" for this Beautiful,,

Especially like the third photo. Where did you see these?