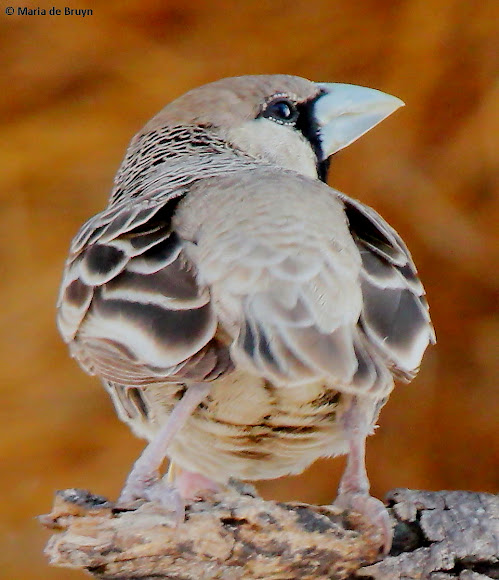 The Sociable Weaver was first described by ornithologist John Latham in 1790. This is the only living species in the genus Philetairus. Males and females look alike. 80% of their diet comprises insects, from which they get all of their water. Harvester termites are a preferred food. They also eat seeds and plant parts; adults may feed insects to the young of other pairs. Their large communal nests, built in trees and on telephone and utility poles, are the largest built by any bird and can house more than 100 pairs of several generations. Some nests have been occupied for over a century and may weigh several tons. Other species of birds share these nests, including Red-headed Finches, Rosy-faced Lovebirds, Pied Barbet, Familiar Chat, Ashy Tit and Pygmy Falcons. The nests are highly structured and provide a more advantageous temperature relative to the outside. The central chambers retain heat and are used for nighttime roosting. The outer rooms are used for daytime shade. Nesting chambers are lined from top to bottom with soft plant material, fur, cotton, and fluff. Sharp spikes of straw protect the entrances against predators. They may skip breeding during years when there is low rainfall and a substantial number (sometimes over half) of birds in the colony may never breed in a given season. Under typical conditions, weavers raise up to four broods per breeding cycle. Sociable weavers are known to assist in the care of younger siblings and unrelated hatchlings and nearly all pairs are assisted by helpers. Snakes such as Cape Cobras are the main nest predators.

Botswana, Namibia and South Africa; dry savannas. The presence of stiff grasses such as Aristida ciliata and Stipagrostis, an important nesting material is an important determinant of its distribution.

Great series with birds and nest!

Thank you, Marta. They are fascinating birds!

Amazing nest community and very beautiful shots of the birds!