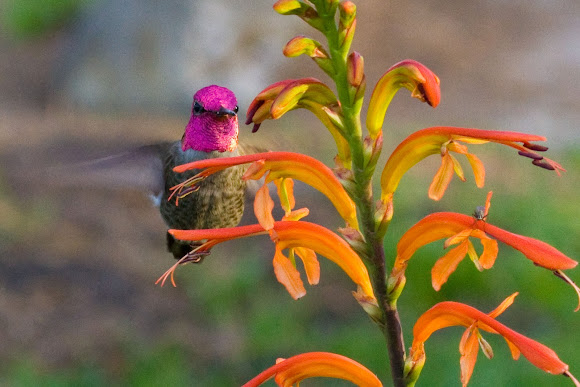 Anna’s Hummingbirds are among the most common hummingbirds along the Pacific Coast, yet they're anything but common in appearance. With their iridescent emerald feathers and sparkling rose-pink throats, they are more like flying jewelry than birds. Though no larger than a ping-pong ball and no heavier than a nickel, Anna’s Hummingbirds make a strong impression. In their thrilling courtship displays, males climb up to 130 feet into the air and then swoop to the ground with a curious burst of noise that they produce through their tail feathers.

Feeding on flowering plants in the parking lot at Fitzgerald Marine Reserve near Half Moon Bay, CA.

Thanks Patty. I was extremely lucky to get this incredible combination of colors and lighting.

Great photos ! - I agree they are like flying pieces of jewellery -lovely birds.

How lovely! And I love the color combination between the bird & the agustache!

Cindy, Thanks for the help with the plant ID. I definitely agree it's African Cornflag.

Hi Donna, great photo. I love the color on the Anna's! It looks like it's feeding on a African Cornflag - Chasmanthe floribunda