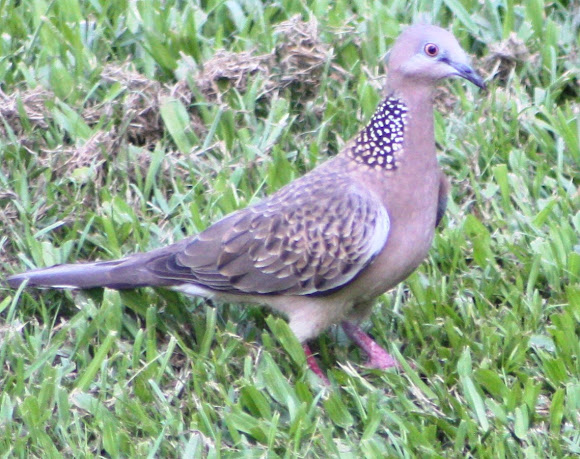 Spotted Dove is long-tailed and slim,ranging in length from 28 to 32 centimetres (11.2 to 12.8 inches). Its back, wings and tail are pale brown and buff. In flight, it shows blackish flight feathers bordered on the inner edge with pale grey, and a flash of white tail feather on either side. Sexes are similar, but juveniles are duller than adults and do not acquire the neck spots until they are mature. The head and underparts are pinkish, shading to pale grey on the face and lower belly. There is a charachteristic black neck patch finely spotted with white. The legs are dark pink.

It is a widespread species in open woodland, farmland and habitation over a good deal of its natural range, and this successful bird has also been introduced to the U.S. to Hawaii and Southern California. Other countries it has been introduced to include Singapore, the Philippines, northern Indonesia, Bangladesh, Australia and New Zealand. In Australia, it was introduced in Melbourne in the 1860s and has since spread, often replacing native doves. In Australia, they are now found in streets, parks, gardens, agricultural areas and tropical scrubs, from Hobart, Tasmania, to Cooktown, Queensland, to Port Lincoln, South Australia. They can also be seen in Perth, Pemberton, Kalgoorlie and Esperance, in Western Australia.

They sure are. Too bad they're introduced here