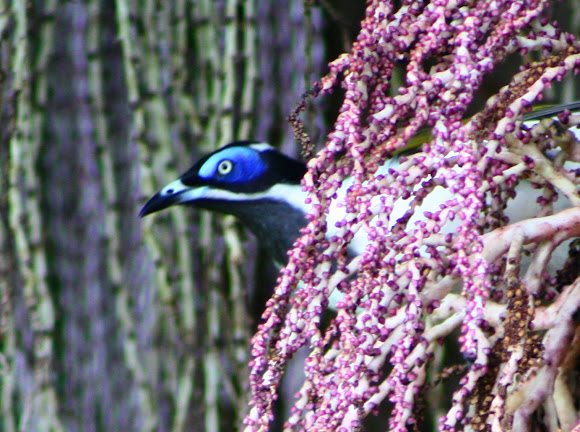 A large honeyeater ranging from 26 to 32 cm (9–13 in) and averaging 29.5 cm (11.6 in) in length, the adult Blue-faced Honeyeater has a wingspan of 44 cm (17 in) and weighs around 105 g (3.7 oz).[15] In general shape, it has broad wings with rounded tips and a medium squarish tail. The sturdy slightly downcurved bill is shorter than the skull, and measures 3 to 3.5 cm (1.2–1.4 in) in length. It is easily recognised by the bare blue skin around its eyes. The head and throat are otherwise predominantly blackish with a white stripe around the nape and another from the cheek

The Blue-faced Honeyeater is found from the Kimberleys in northwestern Australia eastwards across the Top End and into Queensland, where it is found from Cape York south across the eastern and central parts of the state, roughly east of a line connecting Karumba, Blackall, Cunnamulla and Currawinya National Park. It has a patchy distribution in New South Wales, occurring in the Northern Rivers and Northern Tablelands regions, and along the coast south to Nambucca Heads.