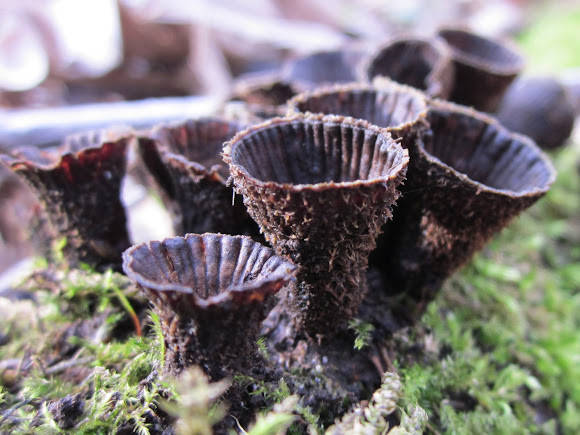 The "nest", or peridium, is usually about 7 to 10 mm in height and 6 to 8 mm in width, but the size is somewhat variable and specimens have been found with heights and widths of up to 1.5 cm (0.59 in). The shape typically resembles a vase or inverted cone. The outer surface (exoperidium) ranges in color from slightly brownish to grayish buff to deep brown; the exoperidium has a shaggy or hairy texture (a tomentum), with the hairs mostly pointing downward. The inner surface of the peridium (the endoperidium) is striated or grooved, and shiny. Young specimens have a lid, technically called an epiphragm, a thin membrane that covers the cup opening. The epiphragm is hairy like the rest of the exoperidial surface, but the hairs often wear off leaving behind a thin white layer stretched across the lid of the cup. As the peridium matures and expands, this membrane breaks and falls off, exposing the peridioles within. The peridium is attached to its growing surface by a mass of closely packed hyphae called an emplacement; in C. striatus the maximum diameter of the emplacement is typically 8–12 mm, and often incorporating small fragments of the growing surface into its structure.===== Peridiole structure= ----The peridioles are about 1 to 1.5 mm wide and rarely up to 2 mm wide. They are disc-shaped, but may appear angular due to pressure from neighbouring peridioles. Peridioles may be dark, or a drab gray if still covered with a thin membrane called a tunica. -------A peridiole and attached funiculus in cross-section Peridioles in C. striatus are sheathed and attached to the endoperidium by complex cords of mycelia known as a funiculus in the singular. The funiculus is differentiated into three regions: the basal piece, which attaches it to the inner wall of the peridium, the middle piece, and an upper sheath, called the purse, connected to the lower surface of the peridiole. Inside the purse and middle piece is a coiled thread of interwoven hyphae called the funicular cord, attached at one end to the peridiole and at the other end to an entangled mass of hyphae called the hapteron. When dry the funiculus is brittle, but when wet it is capable of long extension

Cyathus striatus is a saprobic fungus, deriving its nutrition from decaying organic material, and is typically found growing in clusters on small twigs or other woody debris. It is also common on mulch under shrubs. The features of the microenvironment largely influence the appearance of C. striatus; all else being equal, it is more likely to be found in moist, shallow depressions than elevated areas. It is very widespread in temperate areas throughout the world, growing in summer and fall.

Cyathus striatus has proven to be a rich source of bioactive chemical compounds. It was first reported in 1971 to produce "indolic" substances (compounds with an indole ring structure) as well as a complex of diterpenoid antibiotic compounds collectively known as cyathins. Several years later, research revealed the indolic substances to be compounds now known as striatins. Striatins (A, B and C) have antibiotic activity against fungi imperfecti, and various Gram-positive and -negative bacteria. C. striatus also produces sesquiterpene compounds called schizandronols. It also contains the triterpene compounds glochidone, glochidonol, glochidiol and glochidiol diacetate, cyathic acid, striatic acid, cyathadonic acid and epistriatic acid. The latter four compounds were unknown prior to their isolation from C. striatus

Brilliant stuff alex - not sure how I missed this.
There's a rising dilemma in PN - If you work hard to do your own you miss the others and as the whole thing grows the problem worsens.

thanks people, i only shoot it yesterday, because i didn't expected it there, where i found it! and i was hesistating, because it was already a bit worn off, but appearentlly it has magic !! :)