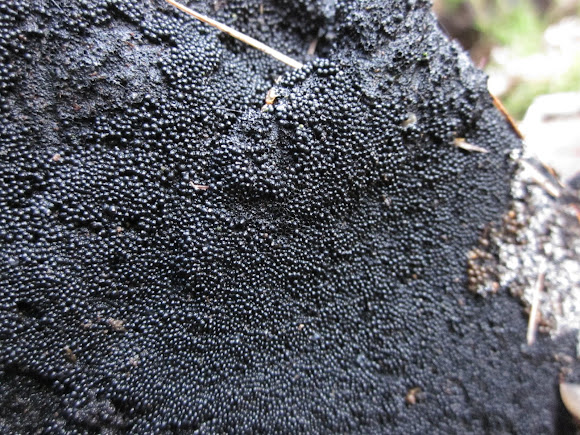 Members of this division are commonly referred to as slime molds. Although presently classified as Protozoans, in the Kingdom Protista, slime molds were once thought to be fungi (=kingdom Mycetae) because they produce spores that are borne in sporangia, a characteristic common to some taxa of fungi. However, the assimilative stage in slime molds is morphologically similar to that of an amoeba. This assimilative stage has been designated a myxamoeba (Fig 1). The myxamoeba, as is the case of the amoeba, is a uninucleate, haploid cell which is not enclosed in a rigid cell wall, and ingests its food by means of phagocytosis. During this mode of ingestion, the food particles, usually bacteria, beceome surrounded by the pseudopodia of the myxamoeba. Once the food has been engulfed in this matter, it is surrounded by a membrane or food vacuole where hydrolytic enzymes are secreted that will digest the food. In fungi, the assimilative stages are mycelium and yeast, both of which are surrounded by a rigid cell wall and obtain their food by means of absorption

There are approximately 500 species of Myxomycetes. They are found on moist soil, decaying wood, and dung. One of the more interesting characteristic about this group of organisms is that while the species of other organisms will vary in different geographical localities, i.e. you don't find the same species of plants and animals on the mainland that you find in Hawai‘i, this is not generally true in the Myxomycetes. Most species can be found throughout the world ( http://www.botany.hawaii.edu/faculty/won... )

still unknown (for me!!), have't found good infos yet

black stuff is hard to shoot without flash, isn't it?
Could you have a view on my last mold spotting? I think it's a raspberry, but not sure.

All of the same species on the last pic, Alex?

thanks ,cathy. the important thing is, don't search for them, just keep an eye open. Mostly, i found the nicest fungi, while standing next to them, when i look long-range in the area. Then almost starting to the spotted location, i notice the ones, i almost stood upon. good luck !!

Interesting! Going to look for different fungi on our next scavenger hunt.