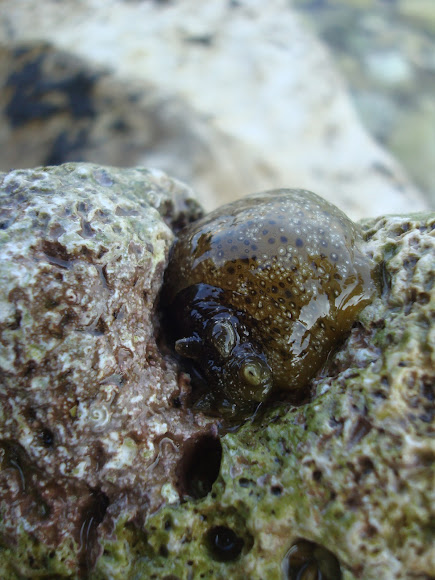 This one it was around 1 cm long but older individuals can grow up to 40 cm long and weighs up to 380 g. Their skin is dark brown to reddish brown, with white to light brown blotches. It has a yellow inner shell that is thinner, flatter and more poorly calcified than other sea hares and measures about 1.5 cm long.

This sea hare occurs in the eastern Atlantic and the Mediterranean. It can be found mostly in shallow water of about 1.5 -10 m. It avoids the intertidal zone because the animals cannot absorb atmospheric oxygen and so die after stranding relatively quickly. Occasionally, like the situation shown on my photos, some are trapped in tide pools at low tide.

Its common name refers to the belief of fishermen that it caused hair loss. It was also erroneously said to have been the source of poison that was used to assassinate the Roman Emperor Titus.